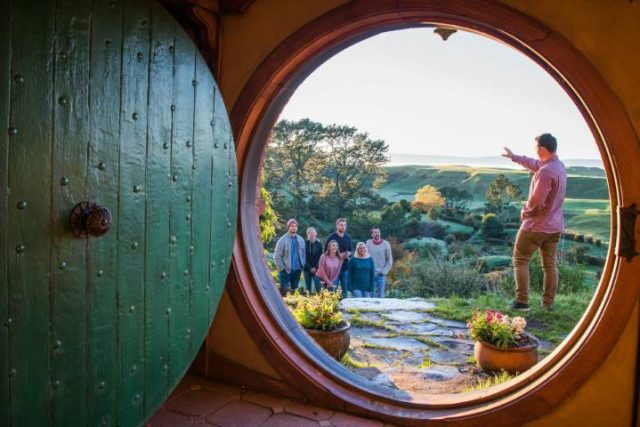 Surrounded by the Pacific Ocean and Tasman Sea, with a population of just over 5 million, New Zealand provides visually stunning movie backdrops that are authentic and real. It also boasts world class production facilities and top creative minds.

Even without the technical wizardry employed by Lord of the Rings director, Peter Jackson, and his Weta Workshop team to add features and structures to existing landscapes, the unique and diverse geography of the North and South Islands is the nearest thing on earth to J.R.R. Tolkien’s imaginary world.

Home to rare wildlife, ice-age glaciers, rugged mountains, deep lakes, meandering rivers, and native forests – much of it unchanged since ancient times, yet all within a short distance of civilization.

Dubbed Middle-earth, Hobbit fans have continued to travel to New Zealand since the films were launched to experience the mountains, lakes, rivers, and plains that were the backdrop to the movies’ famous scenes. More than 150 different locations throughout New Zealand were used to film, after Jackson and his team scoured the country for the most beautiful and diverse areas, and in 2019, more than 33% of visitors to New Zealand visited at least one of these stunning sites.

can experience for years and years to come.” – Sir Peter Jackson

Each region has a story to tell about when The Lord of the Rings and The Hobbit trilogies filmmakers, cast and crew journeyed to their particular neck of the woods or, in some cases, moved in for the duration of filming. Here are a few favorites:

In the heart of the Hamilton-Waikato region, explore the lush pastures of the Shire™ with a guided walking tour of Hobbiton™ Movie Set, as featured in The Lord of the Rings and The Hobbit Trilogies. This privately-owned family farm was spotted by Sir Peter Jackson in 1998 during an aerial search for filming locations for the Lord of the Rings Trilogy.

Mature pine trees in front of a picturesque lake with surrounding landscape untouched by 20th century clutter, perfectly resembled the Shire as described by author J.R.R. Tolkien. It became the famous setting for Hobbiton and was rebuilt in 2011 for The Hobbit Trilogy to remain a permanent tourist attraction. There are 44 Hobbit-holes on site that have been rebuilt exactly as they appeared on film.

Hobbits love their beer, so take a tour of Good George Brewery in Frankton, Hamilton. This brewer is the exclusive supplier of the Green Dragon Inn at Hobbiton and produces a special range of ‘Southfarthing’ ales, ciders, and ginger beers. Since pouring their first draught at the Green Dragon Inn, Good George has supplied more than 1 million litres of beer for visitors to enjoy, and in May 2021 launched their Southfarthing Celebration Ale to mark the occasion.

The looming cliffs, unusual limestone rock formations and prehistoric forest at Mangaotaki Rocks in Piopio look as if they have been created specially to form the backdrop for Middle‑earth™. This area provided the location for Trollshaws Forest and Staddle Farm where several scenes from The Hobbit: An Unexpected Journey were shot; including The Company arriving at a destroyed farmhouse, the exit from the Troll Hoard Cave, Gandalf bestowing Sting upon Bilbo, Radagast’s arrival and the Gundabad Wargs and Orcs attack.

The rocky slopes of Tūroa Ski Field were the setting for Hidden Bay, the entrance to the Lonely Mountain in The Hobbit: The Desolation of Smaug. The crew filmed here for one day, in which giant scaffolding was built down to the site in order to protect native flora and fauna on the mountain.

Get a good look at Mordor and Mount Doom while tackling the Tongariro Crossing. This is considered one of the best day walks in New Zealand. Mordor, home to the Dark Lord Sauron was shot on location around the rocky slopes of the Tongariro National Park. The area’s jagged volcanic rock formations and eerie barren landscapes were ideal locations for creating Mordor’s moody scenes.

The most famous filming location in Wellington is Mount Victoria, which is within walking distance of the central city. The forested areas of the mountain were used to depict Hobbiton Woods, where the hobbits hid from the black riders.

Other Wellington locations include the Hutt River between Moonshine and Tōtara Park, which played the part of the River Anduin; and Harcourt Park, which was transformed into the Gardens of Isengard. Wellington’s Kaitoke Regional Park became Rivendell, where Frodo recovered from a knife attack. Wellington is also home to Weta Workshop, Weta Digital and the Miramar film empire which were central to The Hobbit Trilogy production.

Only in Wellington would you find a 13-metre Gollum in the heart of an international airport terminal. Located on Level 1 of the Main Terminal, the sculpture, which is suspended from the roof, shows the emaciated physique and momentary expression of glee on the face of Gollum, submerged and reaching for his favourite meal of ‘juicy sweet fishes’. The Gollum creation was designed and facilitated by Richard Taylor and Weta’s workshop supervisor Rob Gillies to create an unforgettable experience into Wellington Airport.

Accompanying Gollum is another installation showing Gandalf atop one of two Great Eagles. These impressive sculptures weigh in at one tonne each with a wingspan of 15 metres.

A harsh alpine environment with a stunning landscape of glaciated marble karst, Mount Owen is the place where the fellowship escaped the Mines of Moria in the Fellowship of the Ring. Mount Owen and Olympus (further South in Canterbury) are nestled in the remote back-country and can be visited during a helicopter tour. Driving west from Nelson over Takaka Hill you will find Canaan Downs – the filming site for Chetwood Forest. Here the Ranger ‘Strider’ led the hobbits into the rough country east of Bree in an attempt to escape the Black Riders.

The Mackenzie region is home to many high-country farms, dry tussock plains, stunning blue alpine lakes and jagged mountain ranges. Lake-town – one of the most extensive outdoor sets built for The Hobbit Trilogy – was created at Tasman Downs Station on the shores of Lake Pukaki. The whimsical lakeside village set sits over water incorporating clusters of two-storey wooden dwellings arranged around connecting walkways, waterways and wharves – all featuring the highly detailed style that Peter Jackson is recognised for. Filming at this location was one of the largest operational periods in the shooting schedule with around 700 people on set.

The Hobbit cast member James Nesbitt (Bofur) was impressed by the immense natural beauty and colours of the Mackenzie region and Aoraki Mount Cook National Park, describing the place as “very, very beautiful, huge open spaces, lovely wildflowers… and every kind of colour.”

Nesbitt is not alone in his appreciation. Visitors to the region frequently remark on the colour contrasts that begin with the startling blue of the lakes – due to finely ground minerals in the glacier-fed waters – green forested lowlands, golden tussocked hill country and magnificent snow-capped mountains.

One of the best ways to experience the majestic landscape is on scenic flights that offer an unending panorama of mountains, lakes, glaciers, and the oceans on either side – the Tasman Sea on the rugged West Coast and the Canterbury Plains fringed by the surging Pacific Ocean. There are also options for landings on glaciers and snow, or cross-country tours by 4WD and Argo, and glacier exploring by boat.

One of the most magical locations in The Hobbit: An Unexpected Journey; Earnslaw Burn is a glacier that has created a number of cascading waterfalls that tumble down a huge rock face. Here, Bilbo and The Company are filmed continuing on their quest after departing Rivendell. The Earnslaw Burn Track – beginning in Glenorchy – is a challenging 4-hour hike that rewards with spectacular views at the head of the valley over the glacier and beyond.

Passburn was used for the approach to Misty Mountains and Passburn Track on the Mavora Walkway – one section of New Zealand’s national walkway Te Araroa – is open to the public.

Both The Hobbit and The Lord of the Rings Trilogies used the majestic Fiordland National Park for epic scenic shots. The scene where The Company flees the mountains on the backs of eagles in The Hobbit: An Unexpected Journey was filmed here. Experience giant fiords and spectacular waterfalls with a helicopter flight or boat cruise. The grasslands of Te Anau Downs provided the backdrop for chase scenes, while Mararoa Saddle doubled as the wildlands which Thorin leads the dwarves through.

10 Places to Refresh Your Insta Feed

This website uses cookies to improve your experience while you navigate through the website. Out of these, the cookies that are categorized as necessary are stored on your browser as they are essential for the working of basic functionalities of the website. We also use third-party cookies that help us analyze and understand how you use this website. These cookies will be stored in your browser only with your consent. You also have the option to opt-out of these cookies. But opting out of some of these cookies may affect your browsing experience.
Necessary Always Enabled
Necessary cookies are absolutely essential for the website to function properly. This category only includes cookies that ensures basic functionalities and security features of the website. These cookies do not store any personal information.
Non-necessary
Any cookies that may not be particularly necessary for the website to function and is used specifically to collect user personal data via analytics, ads, other embedded contents are termed as non-necessary cookies. It is mandatory to procure user consent prior to running these cookies on your website.
SAVE & ACCEPT
MORE STORIES
Australia & New Zealand