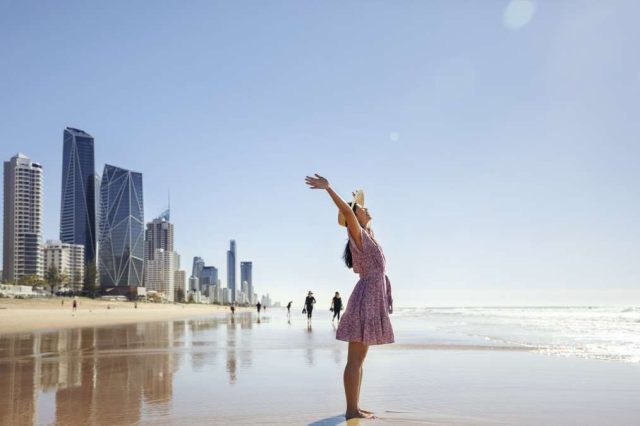 Brisbane is a gateway to Australia’s most important icons, including the Great Barrier Reef, Daintree Rainforest, as well as three other UNESCO World Heritage listed sites. It is also the host city for the 2032 Olympic and Paralympic Games.

Once complete in 2023, Queen’s Wharf Brisbane will house a new casino four luxury hotels—The Ritz-Carlton, The Rosewood, The Dorsett and The Star Grand Hotel—more than 50 new bars and restaurants and up to 2,000 residential apartments.

The stunning new Sky Deck rises more than 300 feet above the Brisbane River, poised to be the photographed location in Brisbane with an open-air rooftop runway of bars, restaurants, and spectacular views for up to 1,500 people.

Fans will see 32 nations playing 64 matches across nine host cities in Australia (including Brisbane) as well as New Zealand for the first time in Women’s World Cup history. The tournament – which is held from July 20 to August 20, 2023 – will embody Australia’s passion for women’s football and provide Australians with the opportunity to watch the best female footballers in the world.

One hour’s drive from Brisbane

The Gold Coast’s heart beats with new sleek hotels—The Langham, Dorsett and Mondrian (2024) among them—and produce-driven restaurants. Surfers Paradise lures travelers from all over the world, thanks to its powder white sand, perfect swells, and 300 days of sunshine along the country’s eastern coastline.

Scenic Rim, named one of Lonely Planet’s Top 10 Regions in the World in 2022, is an area of outstanding beauty located is just outside of Brisbane, surrounded by idyllic National Parks, lush rainforests, spectacular waterfalls, rugged mountain ranges, breathtaking lookouts, as well as epicurean adventures and experiences with an all-around increased emphasis on sustainability.

Beyond this immediate radius, travelers from Brisbane can connect onward to explore five of Australia’s 11 World-Heritage listed sites, among them the Great Barrier Reef, the Scenic Rim National Park, K’gari (Fraser Island), Riversleigh Fossil Fields, and the Wet Tropics.