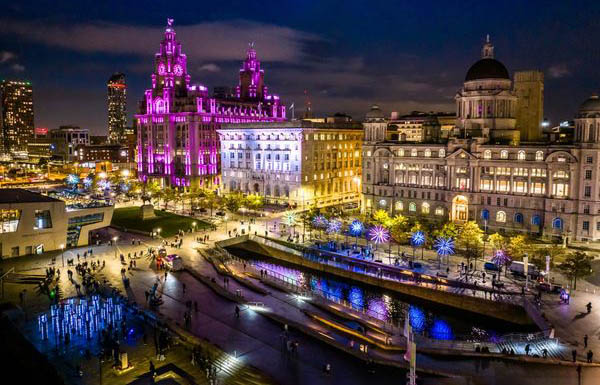 There are plenty of reasons why Liverpool should be at the top of your travel list for 2023 as Liverpool becomes the host city for a series of show stopping events.

All eyes will be on Aintree Racecourse from 13-15 April 2023 as the world stops to watch the Randox Grand National, the biggest horse race of the year. A staple in Liverpool’s event calendar, it returns for another year, as people flock from around the world to be part of sporting history.

Just a few weeks later, on 9, 11 and 13 May, Liverpool will shine on the global stage once again to welcome the Eurovision Song Contest 2023 to the city, hosting on behalf of 2022 winners, Ukraine. With nine shows taking place in front of a live audience, fan zones and a cultural programme of events, there will be plenty of chances to catch all the action in our UNESCO City Of Music.

June will see the launch of the 25th Anniversary of Liverpool Biennial, the UK’s largest contemporary visual arts festival. Titled ‘uMoya: The Sacred Return of Lost Things’, over 30 international artists and collectives will take over spaces in Liverpool with curator Khanyisile Mbongwa at the helm.

Moving onto July, The Royal Liverpool in Hoylake will host The 151st Open for the 13th time from 16-23 July. Golf fans will witness the world’s best players battle it out on the links for the title of Champion Golfer of the Year.

There are lots more reasons to add Liverpool to your travel bucket list next year too. From new openings, to returning events, blockbuster exhibitions and our ever expanding food and drink scene, those who visit Liverpool will find everything at their fingertips in the city and across the region.

A nineteenth century stained glass window, a rediscovered secret doorway and a grand staircase are among the pieces of history being restored at the brand new Radisson RED Liverpool hotel. Opening in December 2022 it’s a great addition to the Liverpool hotel scene for 2023.

BOXPARK have announced they will be opening their sixth site and first BOXPARK-branded location outside of London in Liverpool in 2023. Opening in the Cains Brewery Village in the Baltic Triangle District, the warehouse building will feature 10 independent food operators, three internal bars, al fresco dining and entertainment.

Due to open in winter 2022, over 100,000 square ft of unrivalled entertainment will arrive at Gravity Active Entertainment in Liverpool ONE. Featuring multi-level e-karting, bowling, urban golf, batting cages, food and drink offerings, live entertainment and so much more.

Eureka! Science + Discovery soft launched in November 2022 but is the perfect attraction to visit with children in 2023. The venue, at Seacombe Ferry Terminal in Wirral, includes hundreds of hands-on innovative and interactive activities and experiences based on things you experience in your daily life. Designed for (and with) children and young people up to age 14, there is something for children of all ages to explore.

One of the UK’s most renowned steak restaurants, Gaucho has opened in Liverpool in the former Bank of Liverpool Building and is the first restaurant in the city to exclusively serve carbon-neutral beef alongside Latin American dishes, a vegan menu and a sustainable drinks programme.

Ranked as one of the best steak restaurants in the world, Hawksmoor is famous for its charcoal grilled, 35-day dry aged steaks, award winning cocktails and spectacular interiors. Having opened their doors in Liverpool in November 2022, it’s a must visit for visitors in 2023.

Events Not to Miss

National Museums Liverpool have announced an exciting programme of exhibitions for Spring/Summer 2023. Highlights include Flower Fairies ™, an enchanting world of illustrations from the Flower Fairies books by Cicely Mary barker. Return of the Gods: Zeus, Athena, Hercules, a world of myth and legend from stories of ancient Greek and Roman gods, goddesses and mortals. Photie Man: 50 Years of Tom Woods, a major exhibition from Tom Wood showcasing 50 years of the artist’s work. Happiness!, an exhibition filled with fun and humour celebrating one of Liverpool’s iconic comedians, Sir Ken Dodd.

Our UNESCO City of Music plays host to a series of festivals and large scale music events across the year with highlights including Liverpool Sound City, the UK’s leading independent festival for new music, which returns on 29-30 April with Masie Peters in the headline slot. On The Waterfront, returns to Liverpool Pier Head from 29 June – 1 July with Liverpool locals Jamie Webster and CamelPhat headlining. Whilst in August Liverpool will welcome thousands of fans from around the world to celebrate the legacy of The Beatles for International Beatleweek on 23-29 August 2023. We’ll no doubt have many more to announce in the coming months too.

Film, TV and gaming fans need to add 1-2 April 2023 to their diaries as Comic Con Liverpool comes to town. With past guests including stars from Stranger Things, Twilight, Star Wars, Doctor Who, Lord Of The Rings and so many more, it’s an event not to miss. Vecna himself (Jamie Campbell Bower), has already been confirmed for next spring’s outing.

Whilst The Turner Prize launched at Tate Liverpool in October 2022, you can still catch the prestigious exhibition featuring the four shortlisted artists in Liverpool until 19 March 2023. Also ending on 12 March is Art of The Terraces at Walker Art Gallery, the first major exhibition of its kind that combines fashion, football and art.

They say it’s your birthday

We love a good celebration in Liverpool and 2023 will mark the 15th anniversary since we celebrated being named Capital of Culture for 2008. This means we’ll also be celebrating 15 years of Liverpool ONE, the city’s destination for shopping, dining and entertainment and the M&S Bank Arena, home to Eurovision 2023 and a whole calendar of exciting events.

March 2023 will also see the 60th anniversary of The Beatles’ debut album, Please Please Me, which Beatles venues across the city will do doubt celebrate in style.

8 perfect places to pop the question in Ireland