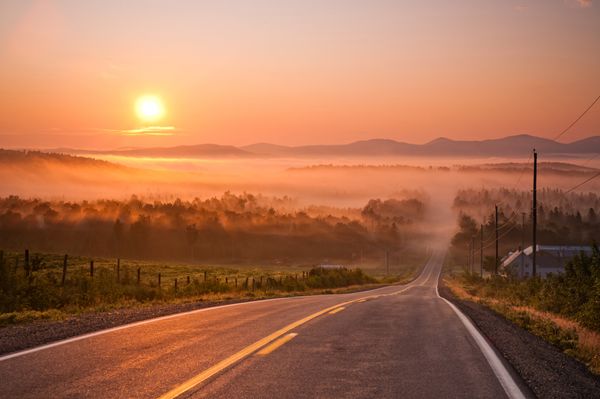 Stargazing along the Summit Drive

What could be more thrilling (and comfortable!) than gazing at the heavens from the vantage point of an inclined seat?  There are 12 such stargazing stops along the Summit Drive, with more due to be added in the municipalities of Audet and Frontenac, at the Maison du Granit, and in Lambton, Weedon and Val-Racine. 10 more stops will be added throughout the summer months. As well, new interpretive signage will be installed at the summit of Scotch Cap in Piopolis and at the top of Mont Saddle in Notre-Dame-des-Bois.

Townships Trail – the setting for a piece of theatre!

People who have seen “Reguines et fantomes: enquete sur le Chemin des Cantons” can now enjoy the adapted version of this piece of theatre in English! The Townships Trail, in partnership with Production Traces et Souvenance, is staging 15 outdoor performances of  “Ghosts & Other Doohickeys”. The plotline features ghost-hunter Glenn Stevens who captures the spirit of Queen Lil and helps to find whatever is troubling her, so that this troublesome phantom can be banished for ever…

Whether you’re travelling by car or by bike over hill and dale, make sure that you take time to explore the 160-km Brome-Missisquoi Wine Route. This signposted route, which winds through one picturesque village after another, is dotted with 22 vineyards run by passionate winemakers who produce an astonishing 60% of all wine made in the province of Quebec.

In addition to sampling the wines and other local products, you’ll find lots of interesting information through Les Amis de La Route des vins (partners of the Wine Route) – places to stay, restaurants, agritourism attractions, cultural venues and outdoor activities. Les Maison des vins de Brome-Missisquoi near Dunham in the heart of wine country, is an information  centre devoted to the wine industry where tastings and talks are given by local vintners.

La Route de thés à l’anglaise – a route themed around the English tradition of afternoon tea – has just added a fifth venue, namely the Ulverton Woolen Mill. (It offers a ‘Bridgerton’ Tea Party every Wednesday, from 2pm-5pm, inspired by the popular Netflix historical-romance, set in Regency-era England.) The other four heritage venues on the Tea Route are the Colby-Curtis Museum, the Beaulne Museum, the Scott Tea Room and the Uplands Cultural and Heritage Centre.

The Circuit des sheds Panoramiques is a network of eight ‘sheds’ throughout the region of Haut-Saint-François – roofed, lookout platforms constructed in a style reminiscent of the local, rural architecture. Each shed, which highlights a piece of history or the surrounding landscape, has its own distinct personality. The most recent one to be added to the Circuit is at Ascot Corner. Situated in the heart of that municipality on the banks of the Saint François River, it has illustrated descriptions recalling key events from the past. The majority of these sheds have a picnic area, providing a peaceful, scenic stopover on the road.

Hit the road in Val-Saint-François

The Val-Saint-François region offers eight, one-day, circuits, most of which feature agritourism venues or activities. Saddle up and pedal off to Gouin Park, Le Campagnard (a cheesemaker), the Café du Couvent and the Lussiers Belgians Farm, all of them part of the Agro-Vélo circuit. Another option is to spend the day, either on foot or driving, on the Rando-Gourmande circuit. Get more ideas from the podcast and take a look at the website. tourisme.val-saint-francois.com/circuits-touristiques/.

Sherbus returns with an updated schedule

This 2-hour, city bus tour is back again for a third season. The narrated trip describes tourist attractions around Sherbrooke, as well as the city’s history and heritage. Some 50 bus tours are scheduled throughout the summer every Friday afternoon and on Saturdays and Sundays (until September 24).

The imaginary village of Three Pines

The crime writer Louise Penny, famous for her bestsellers featuring Inspector Armand and his fellow police officers, was inspired by the village of Knowlton to create the imaginary community of Three Pines. Her fans can get a taste of the settings for her novels by taking a guided tour, courtesy of Three Pines Tours.

The Espace Aux Rives du temps in the municipality of Courcelles (region of Megantic), has installed a new exhibition about maple syrup at the Moulin Bernier. (The Mill is one of its collection of historic buildings.) As well, visitors can now go kayaking, paddle boarding and canoeing on the nearby Bluets (Blueberries!) River and if they want, camp overnight.

A public space with an impressive view

The city of Val-des-Sources recently inaugurated Place de la Traversée, a new, two-level lookout point that offers a panoramic view of a now defunct mine. A farmers market operates at this public space every Saturday (10am-2pm) and RVers can park for up to 48 hours at an unserviced campsite.

And if you need wheels….

Bromont Campervan offers a one-week RV rental service that includes insurance, cleaning services and suggestions for things to see and do. The Bromont-based company caters to couples, families or single drivers and it can design an itinerary to help renters plan an interesting road trip.

How to Travel with a UTE and Feel Like Home at the Same Time?