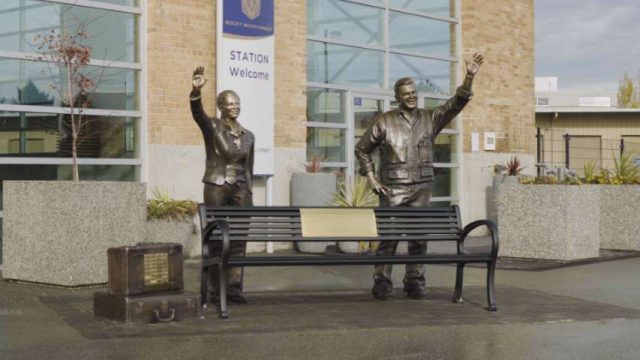 Canadian owned and operated luxury train Rocky Mountaineer honors its employees, ahead of the company’s 30th anniversary in 2020, with a new art installation at its Vancouver station.

The bronze sculpture was designed by B.C.-based artist Nathan Scott to depict two Rocky Mountaineer team members, an on-board host and a train operations coordinator, waving at the train. The Armstrong family, which owns and operates Rocky Mountaineer, commissioned the sculpture to show gratitude for employees who have been instrumental in the company’s continued success over the past three decades.

“We wouldn’t be here celebrating our 30th anniversary without the talent and dedication of our long-term employees. We’re thrilled to present this sculpture to demonstrate how incredibly grateful we are for our team members who make the Rocky Mountaineer experience so special,” said Peter Armstrong, founder and owner of Rocky Mountaineer.

Armstrong, together with his adult children Ashley, Chelsea and Tristan Armstrong, spearheaded the creation of the sculpture to pay tribute to all employees with a special acknowledgement for those who served the company for 20 years or more. At the feet of the figures are suitcases engraved with names of 20-year employees, along with space to add additional names as more team members reach the milestone. Each figure of the sculpture dons a 20-year pin alongside their name tag and a maple leaf pin.

Artist Nathan Scott explained, “It was an honour to work with the Armstrong family to design and develop this sculpture. They challenged me with finding a way to convey the genuine energy and authenticity their team members embody in a way that would stand the test of time. I hope that comes through to the employees and they feel the deep appreciation the family and Rocky Mountaineer have for their contributions.”

The life-sized sculpture took Scott nine months to complete, which he developed first in clay, before creating a ceramic mold into which he poured the bronze to produce the sculpture. Scott resides outside of Kamloops, an overnight stop on two of Rocky Mountaineer’s three rail routes and home to its rail operations and maintenance team. Scott is a self-taught artist who uses his art to connect Canadians to moments of historical regional importance. His other commissioned pieces include ‘The Homecoming’ to commemorate the 100th anniversary of the Canadian Navy, the Terry Fox Memorial at Mile 0 in Victoria, and L.M. Montgomery at Montgomery Park in Cavendish, Prince Edward Island, among others.

Murder Mystery Announced Onboard the Orient Express for May 2020

Hit the Rails This Winter With Frontier Ski