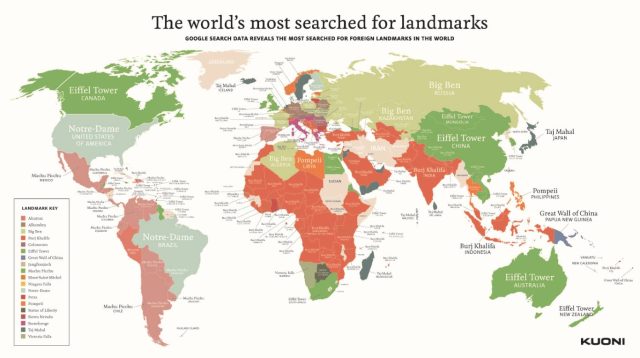 With travel restrictions easing across the globe, luxury travel company Kuoni analyzed Google data to reveal the most searched for landmarks in the world. The research revealed that the most searched landmark globally was Burj Khalifa in Dubai, which 66 countries had at the top of their bucket list.

Despite the ongoing COVID-19 pandemic, online searches for the world’s most famous landmarks have risen by 20% over the past month. Curious to discover which landmark each country wants to visit most, Kuoni analysed global search data to find out the most Googled foreign landmarks in (nearly) every country in the world. This was achieved by ranking average monthly search volume for each landmark and excluding any landmarks local to that country.

Dubai’s Burj Khalifa, renowned for being the tallest building in the world (829.8 m) since its opening in 2009, was the most searched for landmark across the world. The skyscraper topped landmark searches for 66 (37.5%) of countries analysed, including India, Switzerland and most of Africa.

Taking five years to build and named after the president of the UAE and ruler of Abu Dhabi, Khalifa bin Zayed Al Nahyan, the landmark was built to garner international recognition and increase tourism to Dubai, which clearly worked, as an estimated 3.53 million people visited the structure in 20181.

Top 10 Landmarks the World Wants To See The Most

The Eiffel Tower followed as the second most popular landmark to travel to and is favored by 29 countries; with Brits, Canadians and Australians all researching a trip to the Parisian tower of love over any other landmark.

Peruvian architectural feat Machu Picchu was front of mind for 19 countries including Spain and Portugal, ranking third most searched for. Constructed mainly of polished dry-stone walls, the 15th century citadel is considered to be one of the New Seven Wonders of the World, as it was only discovered in 1911.

London’s world-famous clock tower Big Ben is the joint fourth-most searched landmark globally, alongside the Taj Mahal. Although the landmark is commonly referred to as Big Ben, this is actually the name of the Great Bell within the clock tower, which is situated at the north end of Westminster Palace. France, Poland and Russia were among 11 countries Googling the iconic British landmark most, whereas Japan, Sweden and UAE were most interested in the Taj Mahal.

The ivory and marble mausoleum Taj Mahal, which translates to ‘Crown of the Palace’, was commissioned in 1632 as a tomb and is another landmark in the 10 most searched that is simultaneously both a UNESCO World Heritage site and one of the New Seven Wonders of the World.

America, Norway, Israel and Thailand are amongst the 9 countries searching the most for Italy’s ancient Roman city Pompeii. The excavated city was covered in volcanic ash due to the eruption of Mount Vesuvius in AD 79, preserving an intimate glimpse into the everyday life of its inhabitants. The UNESCO World Heritage Site receives 2.5 million annual visitors and is the fifth most searched landmark globally.

The full findings have been compiled into a map which showcases (nearly) every country’s most searched for foreign landmark at a glance.

[insert name & title] at Kuoni commented: “Whilst we can’t travel freely just yet, wanderlust is at an all-time high right now. We were keen to discover which landmarks are at the top of travelers’ bucket lists once we can travel and explore again, to inspire people to dust off the cobwebs on their suitcases and make the most of what the world has to offer.”

The Importance of Turbo Pumps for Air Travel

The Sagrada Familia: Why is Gaudí’s unfinished work still under construction?