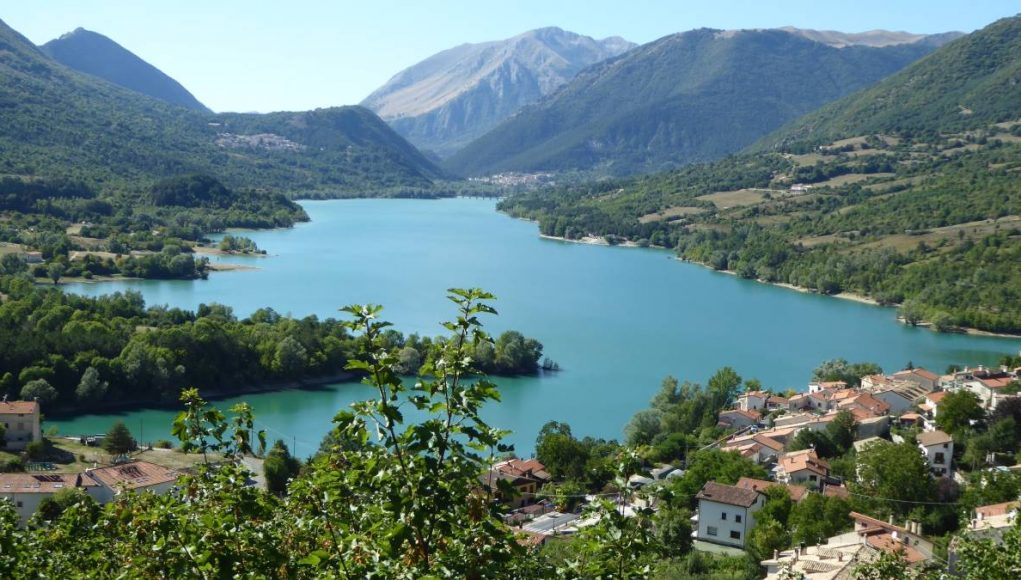 Abruzzo is located in the central south of Italy with air access via Pescara, Naples and Rome. With a low density of population, there is plenty of room for visitors to enjoy the delights of Abruzzo’s mountains, national and regional parks as well as its Adriatic coastline. Like everywhere else in Italy, the region is proud of its gastronomy and viniculture.

The full name is actually the Abruzzo, Lazio and Molise National Park, although the vast majority is in Abruzzo. This is one of Italy’s most important parks and is a huge pristine environment where nature rules without compromise. In these day when space is more precious than ever, there are more than 150 mapped walks to enjoy within the park.

In this haven, wildlife flourishes and some rare species make this their home. Rarest of all, and unique to the park, is the Marsican brown bear, which number 70-80 in total, roaming the park at will. Another unique species is the Abruzzo chamois. A wolf sanctuary has been established near the hilltop village of Civitella Alfedena. There is a viewing platform above the sanctuary and sometimes wolves can be spotted. Looking towards the sky, don’t be surprised to see a golden eagle in flight or to hear a rare Lilford woodpecker in action among the forest trees.

There are three lakes in the National Park, and of these the most important is Lake Barrea, an artifial lake created about 100 years ago, fed by the River Sangro. A panorama of mountains frame the lake, a popular spot with summer visitors.

The villages of the Park:

The headquartes of the Park are located in Pescasseroli, a small town with an aristocratic history, with various patrician families as rulers across the centuries. Today the cute village centre with its typical buildings is the location of many boutique hotels, the visitor centre and providers of nature excursions. During the winter, there is also a small ski area.

Civitella Alfedena, home to the wolf sanctuary, perched high above the valley with a honeycomb of ancient alleyways is picture perfect and home to just 300 citizens, There are two family run hotels and cute bed & breakfasts to ensure a memorable stay.

Villa Barrea is at the head of the lake and from the ruins of its ancient fort, there are stunning views across the lake. Much of the village is pedestrian only making it easy to explore every nook and cranny of this pretty village.

The Adriatic coast and the ‘Costa dei Trabocchi’

The Trabocchi Coast of Abruzzo extends for 70 km in Chieti province south along the Adriatic coast from Ortona to Sal Salvo. The coast takes its name from a ‘Trabocco’, an ingenious fishing machine used from the mid-17th to the mid 20th centuries, These machines were fishing platforms that jut out from the shore for several metres out to sea.

Each Trabocco was attached securely to the rocky shore or the cliffside and a wooden platform was built on stilts into the sea. Sitting on the platform was a covered workshop for processing the catch and to provide shelter while the fishermen waited for the right moment to cast their nets.

Extending from the platform for several metres above the sea were two wooden beams or ‘antennae’. Between these antennae a rectangular net was deployed to intercept a shoal of fish about to pass below. Although close to shore, the sites of the Trabocchi were carefully chosen by depth of water – up to twenty metres where the nets were dropped – currents and direction of travel by fish shoals. Almost as quickly as the net was dropped it was raised with its catch. As easy as it was to drop the net, the task of raising the net full of fish was a back breaking task. Over time, the dropping and raising of nets became electronically operated.

The attractions of the Trabocchi method are obvious. There was not the cost of building and maintaining a boat or the risk of being out at sea in all weathers. Like everything, the Trabocchi fishing method couldn’t last forever and the Trabocchi became unviable and gradually they ceased operating and fell into disuse and disrepair.

Today, there are sixteen restored Trabocchi along the Adriatic coastline of Abruzzo. Several of them have been converted into seasonal restaurants where delicious fish feasts are to be enjoyed, including the regional speciality ‘Brodetto alla Vastese’ – Vasto fish soup. This famous hearty soup is made with tomato, garlic, onion, chilli and a wide variety of local fish, and it tastes all the better with a glass of Trebbiano d’Abruzzo white wine.