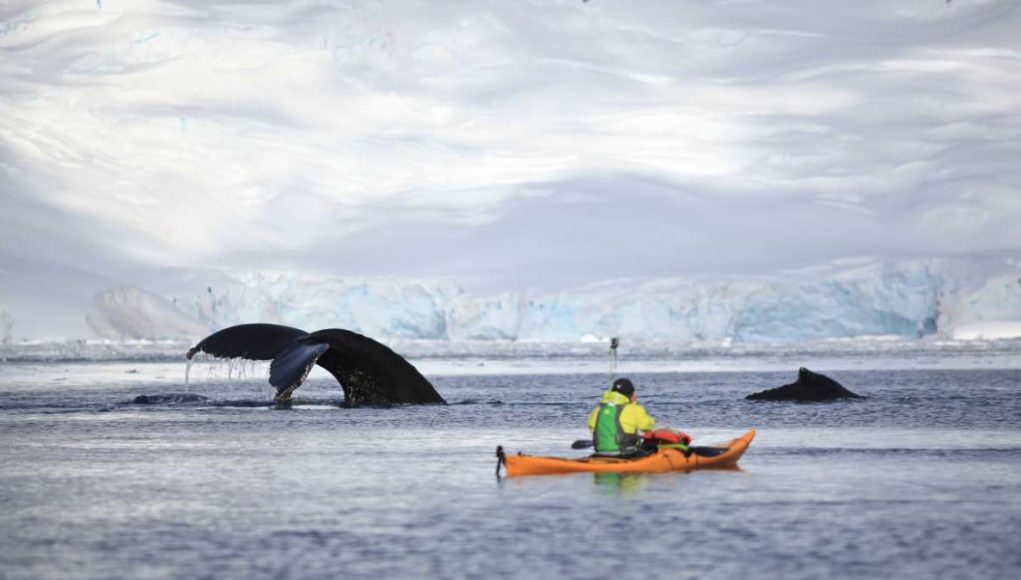 Following the announcement that Antarctica is one of the few Coronavirus-free locations remaining on the planet, it seems that there’s also good news for whale populations in the region – as scientists report seeing an unprecedented 55 blue whales off the UK sub-Antarctic island of South Georgia, during a recent 23-day survey.

Whether this is a sign of increasing numbers, or simply a shift in distribution due to feeding conditions, is yet to be clarified.  However, blue whales remain a rare and breathtaking sight; they are rarely seen in the Antarctic or sub-Antarctica, and usually alone.

The waters around South Georgia are teeming with krill – the food of choice for many whales and other species – transported in strong currents from the Antarctic, making the area a perfect feeding ground.

This is also the reason that the island was at the centre of the prolific whale-hunting industry in the early 1900s, when blue whales were reduced to just a few hundred (an astonishing 363,648 were killed in Antarctic waters altogether).

However, it seems that the ban on hunting, which came into effect worldwide in 1966, may now be starting to achieve positive results.  Dr Jennifer Jackson, survey project leader from the British Antarctic Survey comments:  “We know that more than 100 years ago South Georgia was a good place for blue whales and now, after decades of protection, it seems the territory’s waters may be a good place for them once again.”

The same appears to be true for other whale species, too. Southern right whale numbers have been doubling every 10 to 12 years now that they are protected from whaling.

What’s more, global humpback whale populations have been growing exponentially from an all-time low of 10,000, when whaling finally stopped, to a minimum of 140,000 today. About 70% of these can be found in the Southern Hemisphere.

Humpback and southern right whales, as well as many other whale species, such as killer, sei, fin and Antarctic minke, are now a regular sight around South Georgia and the surrounding waters.

It is possible to visit South Georgia in absolute comfort on the ultimate 21-day adventure cruise, which also takes in Antarctica and the Falklands.  Departing on 30th December 2021 and 7th February 2022, prices start from US$17,995pp (approximately £14,850pp) based on accommodation in a triple suite on board a world-class small ship featuring the highest ice-class rating available (1A super).

A highly knowledgeable and experienced on-board Expedition Team will be on hand throughout the voyage, helping to spot whales and other wildlife, run informative presentations and lead zodiac excursions.

The wildlife and scenery are definitely the stars of this expedition, from the plethora of sea birds that follow the ship across the Southern Ocean and the albatross colonies and penguin rookeries on the Falkland Islands, to the elephant and fur seals on South Georgia and the spectacular icebergs and feeding whales in Antarctica.

For further information about this and other expedition cruises to South Georgia, visit https://www.swoop-antarctica.com/cruises/south-georgia/luxury-explorer

Top 5 Reasons to Take a Cruise Around the World: Unlock the Secrets of a Worry-Free Adventure

This website uses cookies to improve your experience while you navigate through the website. Out of these, the cookies that are categorized as necessary are stored on your browser as they are essential for the working of basic functionalities of the website. We also use third-party cookies that help us analyze and understand how you use this website. These cookies will be stored in your browser only with your consent. You also have the option to opt-out of these cookies. But opting out of some of these cookies may affect your browsing experience.
Necessary Always Enabled
Necessary cookies are absolutely essential for the website to function properly. This category only includes cookies that ensures basic functionalities and security features of the website. These cookies do not store any personal information.
Non-necessary
Any cookies that may not be particularly necessary for the website to function and is used specifically to collect user personal data via analytics, ads, other embedded contents are termed as non-necessary cookies. It is mandatory to procure user consent prior to running these cookies on your website.
SAVE & ACCEPT
MORE STORIES
Travel Gear