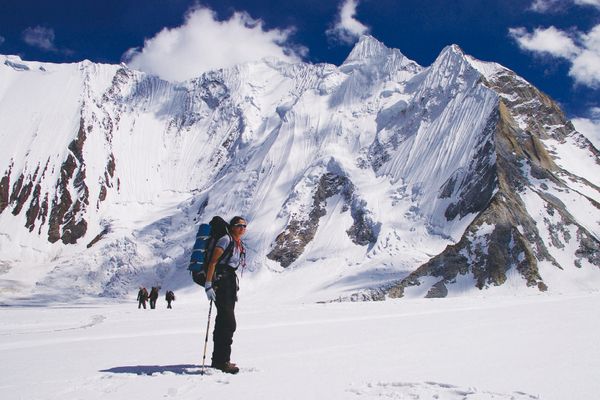 Adventure travel specialist World Expeditions is thrilled to announce that Victor Saunders will lead their new 25-day K2 and Gondogoro La trek at the end of May 2023. Victor will share his insightful and passionate experience along the way, right before joining his climbing team for his ascent of the majestic K2.

This epic exploratory trek, the final entrant into World Expeditions’ most under-rated destinations list, takes a route along the legendary Baltoro Glacier to the “Throne Room of the Gods.” The 25-day K2 and Gondogoro La Trek with Victor Saunders reveals an unrivalled collection of what many describe as the most breathtaking mountain scenery on earth.

“The legendary Gondogoro Pass offers one of the world’s most dramatic mountain vistas: a 360-degree panorama of 7,000m and 8,000m (over 22,000ft) peaks, including the K2. And the so-called ‘Throne Room of the Mountain Gods’ has captured the imagination of adventurers for decades,” says World Expeditions’ North American Manager Nathalie Gauthier. “With ample contingency days planned, the itinerary maximizes the chances of clear views and a successful pass crossing,” said Ms. Gauthier.

The expedition will be led by Victor Saunders, an accomplished mountaineer and award-winning author whose depth of knowledge about the Karakoram is unmatched. Victor is the current president of the Alpine Club, the world’s first mountaineering club founded in London in 1857, whose previous presidents include John Hunt, Eric Shipton, Chris Bonington and Doug Scott.

His climbing CV includes many celebrated first ascents such as the North Pillar of Spantik, the first winter ascent of Langtang, Uzum Brak, Ushba, Jitchu Drake and many others. Other notable ascents include the Seven Summits, a winter ascent of North Face of the Eiger, a winter climb of Shield Direct, the first route on Ben Nevis to be graded VI, Great Trango Towers, Concordia, Manaslu, Cho Oyu and six Everest summits from 2004 to 2012.

World Expeditions’ K2 and Gondogoro La trek is graded 8, entry-level mountaineering. Participants should ideally have experience trekking at altitude and be comfortable in adverse weather conditions. This trip entails extensive & challenging moraine walking, though prior technical mountaineering experience is not mandatory. Terrain will involve low-angle snow slopes, and ropes may be used for glacier travel and steeper sections of ice and snow over the pass.

4 Success Tips for Travelling as a Digital Nomad