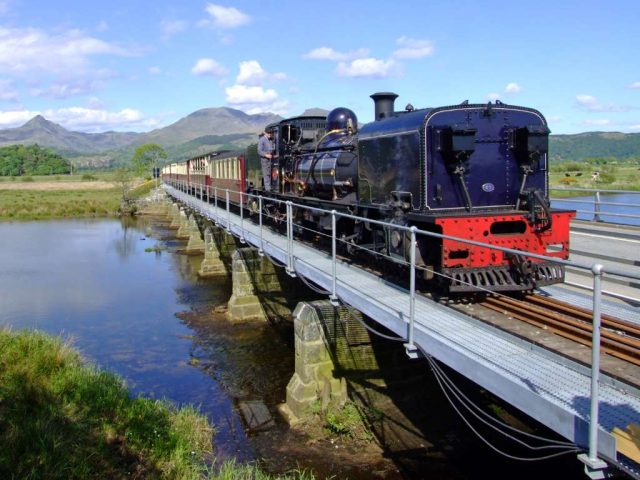 Veteran rail tour expert Alan Heywood can claim to be one of the pioneers of the ‘rail holiday’, having founded Ffestiniog Travel in 1974 and escorted its first overseas tour to Switzerland the same year. At the age of 82 he still sits on the board of the rail tour company and continues to escort travelers by train.

He has compiled his top 10 favorite European rail journeys that have formed the basis of many tours over the years and continue to appeal to a variety of train travelers – from those who enjoy the stunning scenic landscapes they travel through, those who admire the engineering excellence to those who simply yearn for the nostalgia of rail travel.

“It is worth pointing out that not one of the trains in my selection travels at more than 50 mph (80 km/h). Modern high speed trains have an important part to play in our lives of course, but if you really want to see more of the countryside and the people who live and work in it, you need something a little slower and more intimate. You might also get to meet some interesting people along the way.” Alan comments.

BERNINA EXPRESS – A breathtaking journey crossing the Swiss Engadin Alps. Travel on the Rhaetian Railway (UNESCO World Heritage Site) from Chur in Switzerland to Tirano in Italy. With its spirals, tunnels and reaching an altitude of more than 2000m, this really is a spectacular journey in both winter or summer, definitely worth doing twice! Journey by first class on Ffestiniog Travel’s escorted Rhine Sea to Source tour.

BERGENSBANEN – Oslo to Bergen, northern Europe’s highest railway, also known as the ‘Roof of Norway’. Often described as Europe’s most beautiful rail journey, with views of fjords, waterfalls, mountains and lakes. Marvel at some of Scandinavia’s most beautiful landscapes, a ‘must do’ when in Norway and featured on the Ffestiniog Travel’s Magic of Norway escorted tour.

CENTOVALLI LINE – Domodossola to Locarno. A highly scenic rail journey from Domodossola in Italy to Locarno on the shores of Lake Maggiore in southern Switzerland. The line passes over 83 spectacular bridges and viaducts, includes breathtaking gorges and waterfalls, with vineyards lining the route this truly is an experience in itself. Travel the line on Ffestiniog Travel’s Tailored Rail Swiss Holiday.

GLACIER EXPRESS – One of the great railway journeys famously described as the ‘slowest express train in the world’ – but who would want to rush through such beautiful scenery? Experience ever-changing mountain vistas, the beautiful Rhine Valley, cross the Rhine Gorge and climb the Oberalp Pass, the highest point of the line at over 6,000ft. A journey that is featured on most bucket lists is included on Ffestiniog Travel’s Swiss Rail Adventure escorted tour.

ZUGSPITZ – One of only four rack railways in Germany, the Zugspitzbahn travels to the summit of Germany’s highest mountain. Starting at Garmisch Partenkirchen, the train travels through the scenic countryside with views of the river and soon begins its ascent of the mountain. On the journey you can enjoy views of the crystal clear Eibsee Lake and snow covered peaks as you climb nearly 2,600m to the summit where the 360 degree views are breathtaking. This journey is included on Ffestiniog Travel’s Bavaria & Austrian Tyrol escorted tour.

HARZ RAILWAY – Said to be one of the greatest steam railways in the world, the Harz network covers 140km and remains an important public transport service for locals as well as being a tourist attraction. Watch the steam locos working spectacularly hard to climb the Harz range, especially to the highest point at the top of the Brocken, a height of over 1,000m, giving amazing 360 degree panoramic views. Stunning scenery, quaint towns with half-timbered houses and the picturesque UNESCO listed town of Quedlinburg. Enjoy all of this on Ffestiniog Travel’s Tailored Rail holiday The Harz Explorer.

THE JACOBITE STEAM TRAIN – An iconic rail journey by steam train along the picturesque West Highland Line, one of only two railway lines that access the remote and mountainous west coast of Scotland. A highly scenic 42 mile journey between Fort William and Mallaig boasting views of steep-sided lochs, castles, mountains and wildlife. The train also crosses the famous 21-arched Glenfinnan Viaduct overlooking Loch Shiel, made famous by the Harry Potter films. Journey on the Jacobite Steam Train and visit some of Scotland’s cultural jewels on Ffestiniog Travel’s The Western Isles of Scotland escorted tour.

WELSH HIGHLAND RAILWAY – A 25-mile scenic journey by steam train through stunning Snowdonia. Starting its journey in the harbour town of Porthmadog, the train heads inland through the Aberglaslyn Pass, a narrow gorge of considerable beauty and Beddgelert village before climbing the forested hillside and onto the foothills of Snowdon. Passing the summit of the line (‘Y Copa’ in Welsh) the train starts its descent towards the harbour and quayside at Caernarfon – passing small hill farms and running alongside Llyn (Lake) Cwellyn and following the Afon (River) Gwyrfai to reach Caernarfon station beside the impressive Caernarfon Castle. Journey on the Welsh Highland Railway on Ffestiniog Travel’s Wales: From North to South escorted tour

SEMMERING PASS – The world’s first mountain railway and the first railway in the world to be granted UNESCO World Heritage status, is without doubt a feat of engineering excellence. Operational since 1854, the line journeys through the spectacular Austrian Alps crossing 16 viaducts, 100 bridges and passing through 15 tunnels. The 42km journey travels through awe-inspiring scenery that is stunning any time of the year. Ffestiniog Travel include the Semmering Pass railway line on The Alps & More tailored rail holiday.

BELGRADE TO BAR RAILWAY – The railway links the Serbian capital Belgrade to Montenegro’s Adriatic Coast and quite rightly, is known as one of Europe’s best train journeys. The line passes through the Dinaric Alps, rich in culture and history and home to some of Europe’s most breathtaking scenery. For 80 miles between Bijelo Polje and Podgorica, the line climbs high above the valley and there are wonderful views of the surrounding mountains. Experience this wonderful journey on Ffestiniog Travel’s Mountains & Coast in Montenegro escorted tour.

Explore the whole of Germany: 9-euro ticket for local and regional public transport