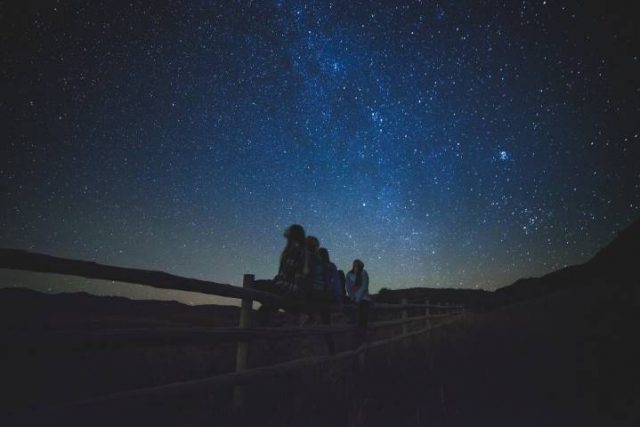 There is not much more mesmerizing than looking up into a clear, dark night sky filled with shooting stars, planets, and constellations. From secluded national parks and deserts to remote islands, there are many stellar destinations with magnificent views of the night sky with no light pollution, providing you an opportunity to observe glistening starts and intricate formations, making for a once-in-a-lifetime astronomical experience. After all, urbanites are not too familiar with the astonishing views the night sky has to offer as high levels of light pollution obstruct the way to the heavens above and blot out the stars.

So if a remarkable stargazing experience is something on your bucket list, then discover our seven of the planet’s most spectacular spots to stargaze that await your visit.

The dormant volcano of Mauna Kea is 14000 feet high above sea level and one of the prime places to observe the Milky Way due to its dry atmosphere and cloud-free, pristine night skies. As the highest point in the Hawaiian Islands, it is the hub of astronomical observation and features 13 massive telescopes, making the Mauna Kea observatory of its kind on the planet.

If you can power through the cold and acclimatize yourself to the high elevation, the summit of Mauna Kea offers night views and an unparalleled stargazing experience.

As one of the driest places on the planet, the Atacama Desert with its nonexistent cloud cover is another top destination you may consider for the ultimate stargazing adventure. Having the clearest night skies on Earth, high altitude, and minimal light pollution due to the low human population, it has long been one of the most favored spots for keen stargazers.

An astronomer’s paradise, the desert is home to many top-level, scientifically renowned observatories in the world that take advantage of its ideal conditions to scan deep space and study the mysteries of the universe. One such observatory is the revolutionary Alma observatory, open for public tours on selected days.

The pristine skies above Tenerife offer various celestial shows, which are sure to leave visitors wonderstruck. With its privileged position at 2400 meters above sea level, the Teide National Park in Tenerife is the highest point in Spain and all its islands and has been recognized as the Starlight destination due to its exceptional stargazing conditions. While it is a must-visit place for its volcanic landscapes, it is also one of the best spots on the planet for stargazers, housing one of the most professional and sophisticated astronomical observatories.

If you want to observe meteor showers, the Milky Way, and 83 of the 88 recognized constellations, the Teide National Park, a UNESCO World Heritage Site, is your prime starry sky viewing point in Tenerife.

Watch the night sky filled with thousands of sparkling stars in one of the naturally darkest yet accessible spots on Earth. Located in Africa’s Namib desert, this private reserve is a true celestial wonder. Even the closest inhabited communities are at least 60 miles away from the location.

The area is an International Dark Sky Reserve due to its exceptionally unpolluted sky and distinguished quality of starry nights owing to low light pollution. If you want to enjoy an epic astronomical experience, then this place is one of the perfect stargazing locales you could visit.

Who would have thought that a national park located only at a 2-hour drive from the ever-illuminated Las Vegas could be one the darkest places in the U.S?

With little man-made lighting interrupting stargazers here, its valleys and canyons plunge into complete darkness as night falls, and that is when the night sky begins to show it heavenly wonders.

The Death Valley National Park Rangers regularly hold astronomy events, and you may head over to the Badwater Basin with them to catch magical views of the new moon. Don’t forget to bring along a refractor telescope, and the sparkle of the Milky Way and the glow of the full moon are sure to blow you away. With a gold tier rating for stargazing, Death valley is one of our top picks to gaze in awe at the expanse of the planets, stars, and galaxies.

If glittering constellations, spiraling galaxies, and meteor showers are what fascinate you, then this International Dark Sky Reserve located in the Mackenzie Basin above the South Island is sure to leave you star-struck. With minimal light pollution, it has the most pristine and darkest night sky in New Zealand, making it a celestial paradise and one of the best stargazing places on Earth.

One of New Zealand’s hidden gems, the splendid night skies here are like nowhere else in the country, thanks to a 1981 law strictly controlling light pollution. You will be able to observe the unique constellations of the southern hemisphere, like the Southern Cross, the Magellanic Clouds, and the Milky Way’s satellite galaxies.

The Pic Du Midi mountain is located in the French Pyrenees. It is also the site of the Pic du Midi Observatory,  which at 2,877 meters above sea level, enables you to enjoy a breathtaking combination of the earthly and celestial realms. A stargazer’s paradise, you can take a cable car and reach the majestic summit in 15 minutes for an opportunity to witness the marvelous panoramic views of the incredible Pyrenean mountain range during the day and see the crystal clear constellations and the Milky Way as night falls.

As one of the areas listed as an International Dark Sky Reserve, the Pic Du Midi is an astronomical paradise and a must-visit to experience the magic of the night sky once in your lifetime.

There is nothing more unique and humbling than starring up the night sky and admiring a blanket of stars and other celestial features in a remote place, far away from the lights and hustle-bustle of the hectic city life. If you want to feast your eyes on the Milky Way and experience stellar views of the heavens above, you know where to be!

Five Beaches Around the World You’ll Want to Visit