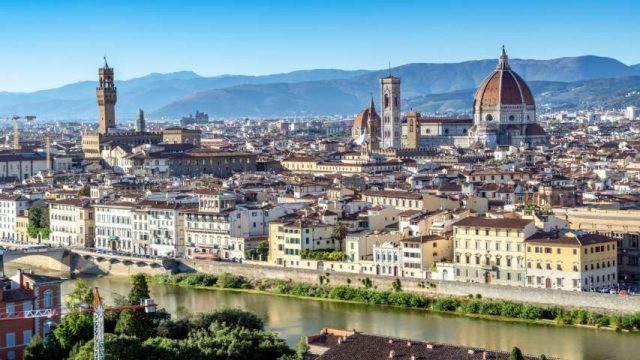 The Duomo. The Statue of David. The Uffizi. The Ponte Vecchio. They’re all magnificent places to visit in Florence, Italy, and they’re worth a visit (even if it’s super crowded). But that’s not the only places we suggest you go, oh no. There are countless under-the-radar museums, fantastic tourist destinations, indescribable restaurants, tasty coffee shops, gelato shops that make the perfect desserts, and so much more. Really, the list is so long, we didn’t even know where to start when we began our research.

It’s okay, though. We’ve concluded, and we’re prepared to share with you the top 10 places in Florence, Italy, or at least we think so.

Well, let’s get to it, then. To begin our list, we’ll give you details on the Piazzale Michelangelo.

Would you like to see the most magnificent panoramic, pretty much, ever? Piazzale Michelangelo can give that to you.

Found in the Oltrarno district, this tourist go-to stop allows you to take in all of Florence in one shot, for free! So many pictures have been taken here, that they’ve shown up on countless postcards, social media accounts, and even books!

You can’t get a more breathtaking site than here, ladies and gentlemen.

Ah, the Florence Cathedral, known for being the most celebrated in the entire world. Initial construction started back in 1436, but the cathedral itself wasn’t 100% complete until the 19th century.

Covered in astoundingly gorgeous white marble, this building was the largest of its kind in the world up until 1881. Atop the structure sits an immense dome, which can be accessed if you climb the 463 steps leading up to it. Even though you’ll be tired, the trip is totally worth it. Once you’ve reached your final step, you’ll see all of Florence (Hint: you’ll be at the highest point in central Florence). Look across the sky, and you’ll lock eyes with the bell tower, better known as Giotto’s Campanile.

The Cathedral of Saint Mary of the Flower is also known as the Duomo di Firenze, the centerpiece of the city. The structure is covered in white marble, and it’s definitely a site worth seeing while you’re in town.

Is anyone looking for the city hall in Florence? Well, here it is.

This structure was built back in 1299, by the same architects that worked on the Duomo. The overall construction scheme of the project was to get the building to look like a castle and let’s just say the architects succeeded at their job.

On the front façade of the city hall building, you’ll find a series of the coast of arms, representing the families and important individuals that lived in Florence throughout the years, including members of the Medici family. On the inside, you’ll find famous decorated rooms like The Hercules Room and The Room of Cybele.

This building is very easy to miss, as it’s next door to the Uffizi, a well-known tourist attraction. Trust us when we say, it’s still worth your time. Many tours are available, and you’ll even get to see Dante’s death mask while visiting!

Do not visit Florence without seeing the Uffizi, a horseshoe-shaped gallery known for its presence of Renaissance art. While there, you’ll get to see popular art pieces, like The Birth of Venus, created by Botticelli. Hundreds of other iconic works are present in the walls of the building.

Keep in mind that this museum is one of the most important Italian museums in the entire world. Other artists like Da Vinci, Titian, and Raphael have countless works spread out throughout the place. Other works that you’ll get to check out consist of The Baptism of Christ by Da Vinci, the Adoration of the Magi by Botticelli, and the Sacrifice of Isaac by Caravaggio.

Simply put, this gallery is the home of Michelangelo’s most famous works of art. Miss out on this, and you’re missing out on the chance of a lifetime (to see one of the best artists work of all time).

If you’re looking for a great gelato shop while you’re in the Florence neighborhoods, head on over to Vivoli Gelato. This place is one of the oldest and best gelato shops around, it may have even been the first gelato shop to invent the decadent dessert back in the sixteenth century.

In the beginning, producing gelato was quite a challenge. Once the 1930s came around, ice was being shipped down in blocks from the Apennine mountains to make the gelato. Now, the process is much easier due to refrigeration processes.

Coffee and pastries anyone? This coffee shop has been open since 1733, and it hasn’t lost its reputation since opening day.

You can do one of two things: Order your espresso, pay at the register, and head on over to the bar to drink your coffee and eat your desserts with friends, or, you can pay a small fee for table service and sit down and relax. Usually, Italians stand near the bar and chit chat before they go on their merry way.

Do you need an escape from the hectic rumble of the city? Go get a paddle board and make your way down the Arno River with a loved one or a friend. This river is one of the most famous in all the world, and it’s a great way to get away from the museums and city life to experience the true nature of Florence.

Don’t forget to take some awesome photos while you’re coasting down the river!

Florence is known for its Renaissance art and a good reason. The St. Mark’s English Church is beautiful, but not just for its architecture outside and inside.

Head on over to this English Church to listen to and experience intense opera sessions and concerts. Interesting events are always being held here, so check the weekly bulletin and make it a part of your schedule.

A bridge that is extremely famous and old, spanning the Arno River. This beautifully crafted bridge holds many shops on both sides. If you’re in the mood for shopping, trail along both sides and check out what they have to offer.

History dates this bridge back to approximately 996, which is kind of insane to us.

Have fun while you’re in Florence and make the best of it ladies and gentlemen! Be sure to devise your plan out before you take on the town, that way you know what you’re in for and what you still have to do.