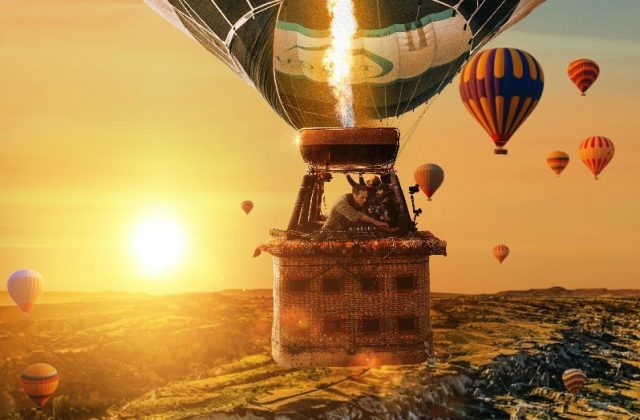 Cappadocia, one of the most special locations on the UNESCO World Heritage List and also one of the most important tourism centers in Turkey, was the scene of a unique DJ performance on Monday morning. Cercle, one of the pioneer platforms of electronic music, has organized a special event in a hot air balloon that floats in the air for the first time in the world. The memorable live-performance by world-renowned artist and producer Ben Böhmer inside a hot air baloon floating in the sky above Cappadocia was broadcasted live on social media. Organized with the support of the Ministry of Culture and Tourism of the Republic of Turkey and the Turkey Tourism Promotion and Development Agency, the event blended the unique experience of watching sunrise with a hot air balloon, the most important element of a Cappadocia trip, with the distinct rhythm of electronic music.

The Cercle team involved in the project stated that Cappadocia, which they visited for the first time, was a magical destination. The CEO of Cercle, Derek Barbolla said, “Cercle has been organizing memorable performances in the most interesting venues around the world. However, this gig in Cappadocia is our first concert which we performed in the air. Broadcasting live during the flight was the most extraordinary performance we ever gave and with the magic of Cappadocia, we had done a great job that will not be forgotten for many years to come. Getting a bird’s-eye view of the city while making music gave us one of the greatest experiences of our lives.”

The event which was broadcasted live from Cercle’s social media accounts, could also be followed on Facebook, Instagram and Twitter accounts of Turkey’s tourism promotion platform, GoTurkey. This special event, in which DJ Ben Böhmer’s entire sound system and TV broadcast console were placed in a hot air balloon, was taped during the flight using footage taken from inside the balloon, from the ground and from the air with 2 drones. Hundreds of thousands of people followed the midair performance of DJ Ben Böhmer who gave his performance while getting a bird’s-eye view of Capaddocia at this memorable event which brought together music, nature, and history,

How to Get Around Paris When Travel Returns to Normal

Formula 1 Grand Prix’s Champion is Both Istanbul and Hamilton

Legal Marijuana and Its Impact on Tourism