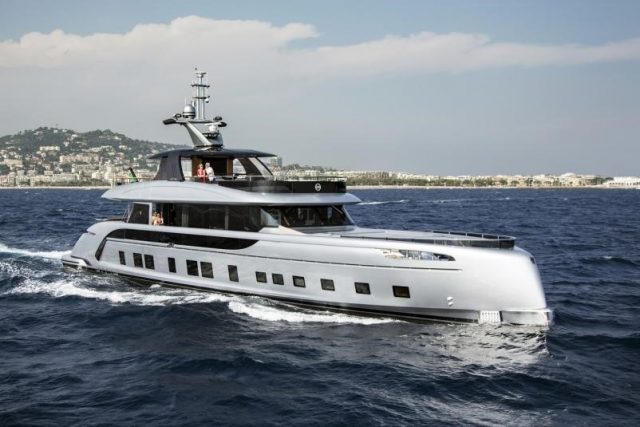 Many well-known car manufacturers have branched out and teamed up with boat builders in recent years to co-create some of the best machines to tackle the seas. Dream Yacht has compiled a list of their favourite collaborations between car and boat manufacturers, and the outcomes are breathtaking:

Mercedes Benz’s AMG range is jaw dropping at the best of times, but when the German car manufacturer teamed up with Cigarette Racing, the outcome was phenomenal. The two brands have set benchmarks in this sector, and to celebrate 10 years of collaboration, they released the 50’ Marauder AMG.

With both manufacturers renowned for creating machines that are focused on speed and performance, it comes as no surprise that the 50’ Marauder AMG is powered by two Mercury Racing engines, which together produce up to 3,100hp.

The boat was inspired by the breathtaking Mercedes-AMG GT R and incorporates design elements such as a sporty cabin layout, seats which were crafted by the AMG Performance Studio and not forgetting the distinctive AMG Green Hell Magno paint.

Aston Martin and Quintessence Yachts (AM37)

As a brand that has strong ties to the iconic James Bond movies, it only makes sense that Aston Martin would team up with a boat manufacturer to create a sought-after machine. Together, Aston Martin and Quintessence Yachts have created a speedboat fit for 007.

The 37-foot AM37 marked the prestige car manufacturer’s entry into the nautical world back in 2016 when it was debuted at the Monaco Yacht Show. The powerboat comprises design, technology, style and comfort in a unique way, making it nothing less than desirable.

Aston Martin’s bespoke personalisation service ‘Q by Aston Martin’ allowed for the interior to be completely customised. The cabin of the AM37 flaunts Baltic blue and cream truffle upholstery, which is perfectly complemented by sparks of chrome and the Mako blue hull finish. Ostentatiously displayed on iconic models such as the famous DB11 and DBS Volante, it makes sense for the powerboat to be finished in this stunning paintwork.

As part of an exclusive collaboration, Lexus and Marquis-Larson Boat Group created a 65-foot premium performance yacht. Branded as LY 650, the boat is an extension of Lexus luxury, with a maritime interpretation. It boasts advanced technology, three luxurious staterooms and several entertainment areas along with an array of amenities.

Despite its grand design and large dimensions, power is not compromised with the LY 650. The luxury yacht is expected to go into production in the second half of 2019.

The only existing superyacht with Porsche DNA, the GTT 115 is a unique and stunning creation, with only 7 ever being created. Utilising three variable-speed generators in conjunction with two 1,650hp V12 diesel engines and a pair of electric motors, power is not compromised despite the hybrid capabilities.

The triple deck superyacht is made up of subtle Porsche design elements, particularly the paintwork colours it is available in. Carrara White, Rhodium Silver, Chalk and Monte-Carlo blue exterior colours take pride of place on popular models such as 911 Turbo S and the 911 Carrera GTS. Meanwhile, the exterior is made up of classy design elements, including a seamless blend of exotic natural woods and Italian marble which is complemented by stylish furnishings and accessories.

Henrik Fisker, an automotive designer who has worked with the likes of prestige brands such as BMW and Aston Martin, branched out into the nautical world in 2016, following the announcement of a partnership with Benetti. Fisker and the Italian boat building company together created a 50-meter-long three-deck superyacht that was built on a concept of sustainability, incorporating reclaimed wood, solar panels and an optional hybrid engine into the design.

The boat has six cabins and can accommodate up to 12 guests who can spend their time utilising amenities such as the retractable ocean-view terrace, minibar, a staircase leading to a private home theater, library, curved television, walk-in closets,and a ceiling that recreates the night sky.

So, there you have it. Some of the most impressive boats built to grace the sea with unique and distinctive automotive design features from some of the most prestigious manufacturers.