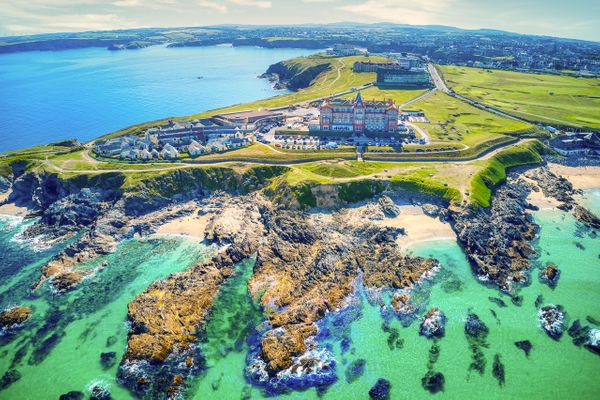 As we celebrates the momentous Platinum Jubilee this summer, why not be treated like royalty with two nights in one of The Headland’s most exclusive suites?

Stay like a sovereign in May and June with two nights in the stylish Victorian hotel, which has hosted numerous feted guests over the past 125 years. The list of visitors reads like the most outrageous dinner party in history.

In the early 1900s, King Edward VII and Queen Alexandra were the first royals to stay there. Later King George V and Queen Mary (pictured) came to The Headland, whilst current Prince of Wales and Princess Royal have also enjoyed several visits in recent years.

Celebrity royalty such as George Clooney has also stayed at the hotel, as well as other famous faces which cannot be disclosed!

The Headland has a stately authority all of its own and is recognized as one of Cornwall’s most iconic hotels.

It enjoys a commanding location on the cliffs overlooking Newquay’s famous Fistral Beach and architecturally it is bold, unapologetic and original.

Inside, it oozes opulence and old-world charm, with a touch of decadence. But the luxury facilities, the attentive staff, and the exquisite furnishings should not be mistaken for formality, or exclusivity.

What better reason to enjoy its majesty than during the Platinum Jubilee, which will mark the Queen’s incredible 70 years of service to the UK in early June.

The hotel did not enjoy an illustrious period when the Queen took the throne in the early 1950s. The Roaring Twenties had become a distant memory and post-war rationing, miserly owners and a shortage of provisions caused the building to become something of a cold, creaking relic.

Guest capacity was slashed in half, paint peeled and wood rotted, until the hotel was bought by John and Carolyn Armstrong just two years after the Queen’s Silver Jubilee in 1977.

Despite facing serious structural, decorative and business issues, the couple, who still own the hotel today, stopped at nothing to reinvent it as a modern, luxury hotel.

Four decades and more than £45 million of improvements and repairs have turned The Headland from a wreck to a multi-award-winning destination hotel, complete with 88 five-star bedrooms, a state-of-the-art gym, an award-winning spa, a six-pool Aqua Club, three restaurants and the best sea views in Cornwall.

Included in the two-night Platinum Jubilee stay in a Fistral suite, Ocean suite or Best suite will be daily breakfast, a three-course dinner in the Samphire restaurant and a glass of Champagne on the first night; a two-course supper in The Deck on the second night.

Breathtaking Live Show to Be Staged on Six Summer Saturdays