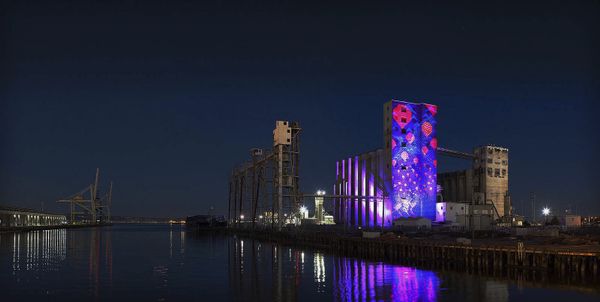 Now in its fifth year, “Illuminate SF Festival of Light” shines a light on 36 dramatic, eco-friendly light art installations and a variety of other light-related events and activities.  All are accessible by public transport and many are free for all to view. From Thanksgiving 2017 through New Year’s Day 2018, art lovers are invited to embrace the power of light and tour San Francisco’s art installations by a diverse range of local and world renowned light artists.

“Illuminate SF Festival of Light” has grown to include intimate artist talks, museum tours and a myriad of other light art activations across the city. Dates and details for these events will be announced in November and will be available at www.illuminatesf.com. More events will be added to the website as they are confirmed.

There are five new installations to celebrate this year:

San Francisco’s “Illuminate SF Festival of Light” offers the rare opportunity to connect with local artists with artist talks and neon light tours during the longest nights of the year. These free guided tours, talks and participatory experiences will once again highlight the newest permanent and temporary installations. This is all in addition to the city’s crown jewel, Leo Villareal’s, The Bay Lights, dazzling on the north side of the San Francisco Bay Bridge’s western span.

The works come to life at dusk throughout 14 San Francisco neighborhoods with a luminescence that will turn any evening into an illuminating adventure, especially when combined with exploring San Francisco’s world-class museums performing arts and restaurants. The light art can be found throughout the city in neighborhoods in the Embarcadero along the waterfront, in North Beach, Civic Center, Central Market, the Inner Sunset, South of Market (SoMa), Potrero, Mission Bay, Bayview, Golden Gate Park, Hayes Valley, South Beach, the Castro, the Mission District and even flying in or out of San Francisco International Airport (SFO).

There are 25 permanent light artworks within the city’s 49 square miles, including:

There are five temporary light artworks within the city’s 49 square miles, including:

“Illuminate SF Festival of Light” and www.Illuminatesf.com are presented by the San Francisco Travel Association in collaboration with local civic, arts and cultural partners.