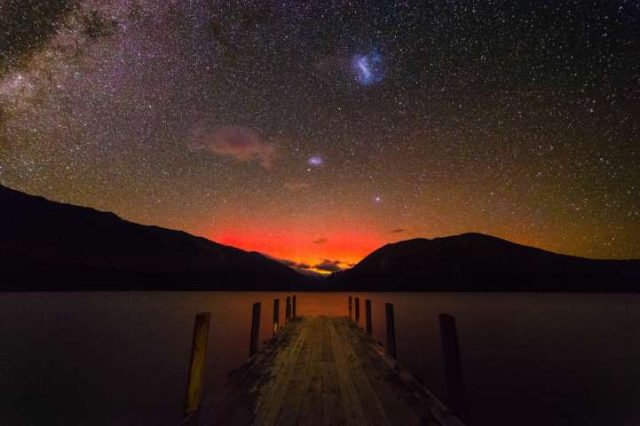 Aotearoa New Zealand is in celebration mode with the arrival of Matariki, a significant time in the New Zealand cultural calendar marking the beginning of Māori New Year. Each year the Matariki cluster of stars – known to astronomers as Pleiades or the Seven Sisters – rises in New Zealand skies. Believed to have formed more than 100 million years ago the cluster plays a pivotal role in modern and ancient Māori mythology.

The Matariki celebration is essentially based around 3 major principles:

This astronomical event inspires a selection of festivals across the country and is seen as a time to celebrate new life, remember those who’ve passed, and plan for the future. A time to spend with whānau (extended family) and friends – to enjoy kai (food), kōrero (story) and waiata (song). This year, the reappearance of the constellation will be visible around June 24 – aligning perfectly with the new official public holiday.

How to Celebrate Matariki

Traditionally, festivities were conducted to celebrate Matariki. They followed the harvesting of crops when the pātakapātaka (food storehouses) were full, freeing up time for family and leisure. These festivities included the lighting of ritual fires, the making of offerings, and celebrations of various kinds to farewell the dead, to honour ancestors, and to celebrate life. Nowadays, across New Zealand, people come together to remember their ancestors, share food, sing, tell stories, and play music.

Sharing food is an essential ingredient of modern Matariki – which coincides nicely with the seasonal yearning for warmer comfort foods – as families, extended tribal families, and communities get together to savour the fruits of the harvest. Kites also play an important role in Māori culture, particularly during the winter season when they are flown to signify the start of Matariki. The Māori kite is called manu tukutuku or manu aute – manu translates as either kite or bird. Another word for kites is pākau, meaning the bird wing. Māori flew kites for recreation, but also as a means to communicate with those who had passed on, connecting heaven and earth.

Every year there are many events that take place throughout the country honouring Matariki including lectures, dinners, balls, and a host of different celebrations. Many groups and individuals rise early in the morning and head outside to view Matariki before sunrise, offering their thoughts, words, and karakia (prayer) to the stars. Some still call out the names of the dead, some still read the stars and try to predict the bounty of the new season, and some still cook food for Matariki and offer this food in the ceremony.

Today there are many different ways you can acknowledge the Māori New Year and observe the rising of Matariki – including:

Events Around New Zealand for Matariki