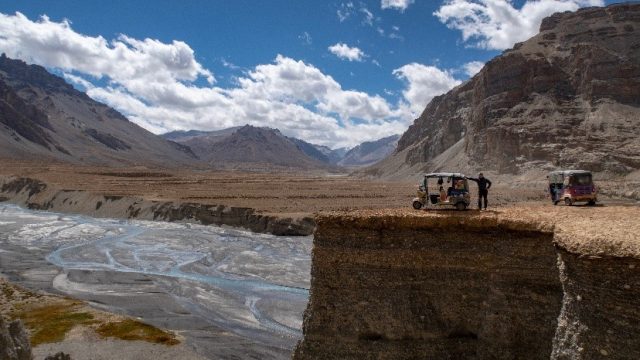 The Himalayas are on many travelers bucket lists, but if you’ve only got a week or two off work it’s not easy to ‘squeeze them in’…until now that is.

Whilst the usual mode of transport for tourists in the Himalayas is by foot, The Adventurists have chosen a less conventional means of getting over 5000-metre mountain passes, rickshaws.

The Rickshaw Run Himalaya is now in its second year and looks to offer a week-long Himalayan experience like no other.

Starting in Leh, a high-desert city in northern India, the Run follows the famous Leh-Manali Highway and Spiti Valley route to finish around 650 miles later in the foothills of Shimla. ‘Highway’ is a very loose term for the route you follow, which is only open for four months of the year and winds its way up and over three huge passes including the Tanglang La pass, at a dizzying height of 5328 meters.

What the route lacks in tarmac it more than makes up for in culture and incredible vistas; taking in the remote and beautiful Spiti Valley, one of the last haunts of the snow leopard, and thousand-year-old Buddhist monasteries before soaring up mountainsides to unveil views across some of the world’s tallest peaks.

For those who have done the Run before, it is the local people they met along the way that made the trip most memorable. The area is inhabited by semi-nomadic people who live in yurt-style tented communities and, once they’ve stopped laughing at the fact you’re in a rickshaw, are incredibly welcoming and hospitable.

Whilst there are sporadic small guesthouses along the route it’s more than likely that, after a warming cup of chai and a bowl of noodle soup, you’ll be invited to spend the night hunkered under a sheepskin for a truly authentic Himalayan experience.

The route would take most people over a month to walk but is ‘easily’ done in a week in a rickshaw, bypassing the need to lug huge rucksacks around whilst still allowing you to breathe in the mountain air and feel the wind in your hair. With so much to take in, you won’t want to rush the journey, not least because you’ll need time to acclimatize before heading up to 5000 meters (safety advice is given before you set off), but you’ll not need to argue with your boss about getting a month of work either.

The Rickshaw Run Himalaya happens in June, starting in Leh and finishing in Shimla, and then again in September in reverse. To find out more visit https://www.theadventurists.com/brochures/rickshaw-run-himalaya/