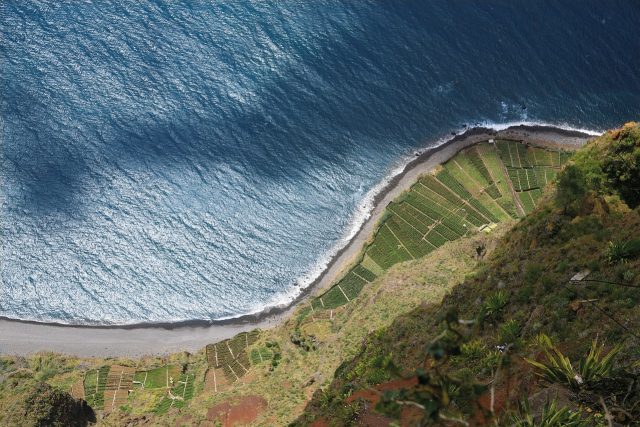 Madeira is a semi-tropical island rising from sea level to over 6,000 feet. Its steep pitch gives the island six distinct climate zones. The ancient Laurissilva cloud forest at the highest elevations is classified as a UNESCO World Heritage Site. In fact, 2/3rds of Madeira is conservation land. It has mountain plains, valleys, high peaks, streams, rocky coastlines, and tidal pools. The island has a unique landscape accessed by a modern roadway system of new tunnels, and the older mountain roads they replaced that wind along the hillsides.

The south coast is sunny, and home to the cultivation of bananas, sugar cane, and grapes. Quaint fishing towns rise off the coast, where small hotels and villas welcome guests. The east coast is home to the historic towns of Caniçal, Machico and Santa Cruz. The wild Ponta de São Lourenço reserve snakes out into the ocean with great hiking and impressive views. The north coast is rugged, and features small towns and great surf. Santana is known for its straw roofed homes and great hiking and Sao Vincente has a series of lava caves. Inland, the massive peaks of Pico Ruivo and Areiro make for wild valleys and cliffs, with lots of grazing sheep and sweeping views. To the west lies the massive flat mountain plain of Paul da Serra, which feels like the surface of Mars, and the crater valley of Curral das Freiras. The sunny west coast runs from the tidal pools of Porto Moniz to the cliffs on the point at Cabo Girão.

Some 30 miles from Madeira is the smaller island of Porto Santo, famed for its long sandy beach, dunes, and vineyards. Porto Santo was where Portuguese ship first landed in 1419. Today, it earns the nickname the “Golden Island” from its undeveloped beaches and features a handful of hotels. Porto Santo’s beach is said to be one of the best in Europe, and its golden magnetized sands are famous for healing sore aches and pains. A new set of spas has recently opened to feature the sands, joined by a new golf course. Dry and sunny Porto Santo gets very little rain, perfect for a relaxing beach getaway any time of the year.

The uninhabited Desertas and Selvagens Islands are southwest and south of Madeira. The Desertas Islands’ three small, volcanic islands are a nature reserve. They serve as the last refuge of the Mediterranean monk seal (Monachus monachus), the rarest seal in the world. Another 180 miles south of Madeira are the Selvagens Islands, two groups of small islands also serving as a rich nature reserve for some of the rarest plants on the planet. Ideal nesting conditions make the islands a perfect bird sanctuary. Boat trips can be arranged, but environmental laws limit visitor numbers.

Portuguese explorers discovered first Porto Santo and then Madeira Island in 1419. They named it ‘Madeira’ (“wood”) because of the abundance of forests. By 1425 the uninhabited islands were being settled, and soon became crucial in a growing trade network between Europe, the Americas and the East. The islands will celebrate with events, programs, cultural happening and fun over the coming year.

Next Spring the all-new Savoy Palace will open as a 5 star hotel in Funchal. With 580 rooms, the new Savoy Palace will offer three swimming pools, a spa, two restaurants, a rooftop bar, a garden bar and a fitness facility. With ocean views, the Savoy Palace was designed by Madeiran architect, Francisco Cayres, with extensive grounds, terraces and gardens consisting of large trees and varied ornamental subtropical plant species and combined with pergolas and water features, creating a sense of balance and harmony.

The Pestana Churchill Bay Hotel is a classic new hotel set in the center of the quaint fishing town of Câmara de Lobos – and it looks to be right out of a painting. The hotel takes its name from Winston Churchill, who was a frequent visitor to the town, and often painted the waterfront where the hotel is set. Nestled right on the Bay of Câmara de Lobos, guests will enjoy views of the sea and the colorful port, which have drawn artists to Câmara de Lobos for generations. The new hotel will feature 57 rooms overlooking the bay, 2 bars and restaurants with buffet and a la carte breakfast service for lunch and dinner and an outdoor swimming pool.

The Hotel Cliff Bay, a new five-star luxury hotel, is coming to Madeira in the spring of 2019.

The hotel is set in the heart of Funchal, overlooking the ocean. It will offer large suites, luxurious comfort, wide balconies, an exclusive reception area, an infinity pool, restaurant area, bar and terraces. All this surrounded by gardens, and very close to the Atlantic.

The World Travel Awards nominated Madeira as Europe’s leading island destination. This is the 5th time the island has been recognized for its offerings. As the World Leading Island Destination in 2016, Madeira is now in the running for the World title, to be announced in November. On the spotlight of the “Oscars” of Tourism, Madeira was recently tapped to be the host of next year’s World Travel Awards European Gala.

Madeira is an Autonomous Region of Portugal. The archipelago has two main inhabited islands, Madeira and Porto Santo, and two groups of uninhabited islands, Desertas and Selvagens. With a total area of 310 square miles, its capital is Funchal.

Madeira has a population of 255,650, which represents 2.5% of the total Portuguese population (10.5 million). The majority of the islanders live in and around Funchal. Santa Cruz, Câmara de Lobos, and Santana are the next biggest cities.

From the United States, direct (1-stop) flights are available out of cities including  Boston, New York, Newark, Providence, Philadelphia, Washington DC, Miami, and Atlanta. Azores Airlines and TAP are the main Portuguese operators flying directly and at the best rates. United, American, Delta, Norwegian or British Airways also fly to the island via connections.

Traveling from the mainland, Porto, Lisbon and Ponta Delgada airports all have non-stop flights to Funchal. And, the low-cost airlines Easyjet and Transavia also offer good deals and service.