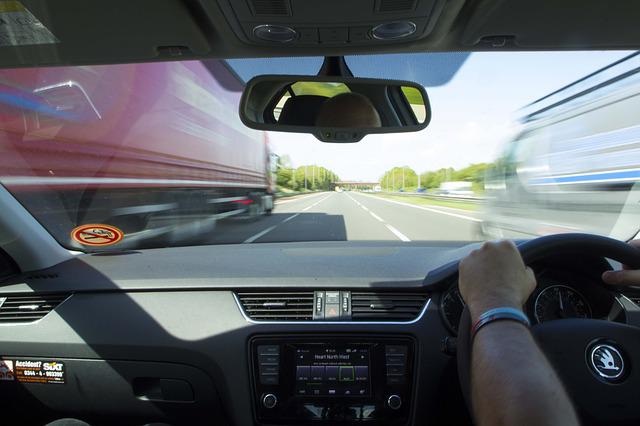 In the past year, searches for ‘rules for driving abroad’ have increased by +133%, identifying there are some uncertainties to uncover. Ever heard of someone being fined for forgetting their keys in a parked vehicle?!

To save travelers from risking a fine or unpleasant encounter with the local police, Looking4.com has dug up some unusual driving rules across the world.

In Germany, the so-called rule of ‘rechts vor links’, which translates to ‘right before left’ is mostly found in residential areas. If there are no signs indicating otherwise, people driving towards a crossroad will have to give way to anyone coming from the right.

Looking for a little adrenalin rush? On the German Autobahn, there is no speed limit, even though the recommended speed is 130 km/h.

On top of that, you are, technically, allowed to drive your car completely naked. Just be wary not to bother anyone as they may file an official complaint with the police.

If you’ve been caught drunk driving, there is a chance that you might have to install an alcohol interlock into your car. That means you’ll have to breathalyse each time before being able to turn your vehicle on.

Just quickly jumping out of the car to grab your morning coffee without locking it? Leaving a car unlocked or forgetting keys in an unattended vehicle could lead to a maximum of 20 penalty units and result in a fine. The amount you’ll have to pay depends on the state you’re in, for example in New South Wales one penalty unit equates to $110, meaning you could be fined up to $2200 for this offence!

When arriving at a crossroad with stop signs in the US you will have to stop and if others stopped too, whoever was the first to arrive is the first one to set off again.

In a majority of the states, you’re not allowed to carry any opened containers of alcohol in your car, that’s called the open container law. You may be able to keep these in your trunk but check the laws in your state before doing so.

At traffic lights, you’re always allowed to turn right, however, you’ll still have to make sure to check for anyone coming from the left first!

You’re looking to go car shopping on a Sunday in Colorado? No can do! A law is preventing dealerships from opening on Sundays.

You’re not that bothered about showing off your sparkling clean car? Think again, as in Russia you’re not allowed to drive an unwashed car and it might land you a fine.

Additionally, if you’re feeling sorry for the guy trying to hitchhike on the roadside it’s better not to stop as taking hitchhikers with you is illegal too!

Even if you just need a sip of water, in Cyprus you may be fined for it, as you’re not allowed to take either of your hands off the steering wheel at any point while driving. The fine can be up to €85 and 1-3 penalty points.

Under any circumstances, while driving a vehicle you must wear a shirt.

To reduce traffic, the numbers on your license plate determine on which days you’re allowed to drive your vehicle on the roads.

In Sweden, you will have to keep your lights always switched on, no matter how much daylight is left.

Most European countries have some general rules you should be aware of, such as always having your driver’s license on you if you’re driving a vehicle. Often you will also have to ensure to change your summer tires to winter tires in fall, no matter the weather.

A spokesperson from Looking4.com commented: “When driving abroad it’s wise to check out the local rules around driving before setting off to avoid unpleasant surprises. As the largest UK-owned airport operator we’ll ensure a safe and relaxed take-off, while you familiarise yourself with the rules at your destination.”

To make sure you don’t get caught out before you actually leave the UK, make sure you organize your parking or transport to the airport in advance.

Pre-booking an airport car-park comes with the additional benefit of being located closer to the airport itself so you’ll have less hassle when it comes to transporting your luggage.

To find out how you can get the best deal on parking visit https://www.looking4.com/uk/airport-parking.

Orlando Celebrates Halloween with Frights and Fun All Season Long