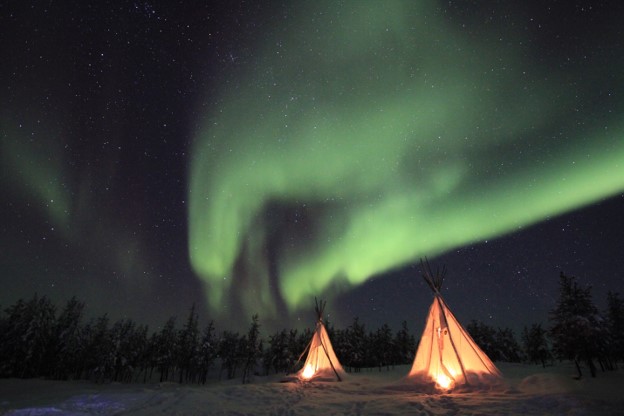 The Aurora Borealis, or Northern Lights, can be seen spinning through the earth’s atmosphere when charged particles fall from the sun onto our magnetic field.  If you’re lucky, you can spot this colourful night show at polar latitudes on dark, moonless nights or waltzing through the sky at northern light reserves during equinox season.

From a feather bed in a glass, Scandinavian igloo to the foot of a Teepee in Northern Canada, we’ve got the best seats to the celestial party:

Probably one of the best places in the world to view the Northern Lights is right here in Canada. Yellowknife is home to Aurora Village, a small resort at the foot of the Ingrahim Trail—a path famous for its Aurora Borealis viewing. The Aurora Village is entirely Aboriginal-owned and is rich with the heritage, culture, and traditions of the Dene and Métis people who call Great Slave Lake their home. The village is sheltered from the subarctic wind by a thick Canadian forest and offers Teepees and fire pits at the end of the hike.

Although most visitors tend to head to Rovaniemi to view the Aurora Borealis, the visibility is often limited due to the light pollution from the city. We suggest heading further north to Kakslauttanen, a small resort village situated deep within Finland’s boreal forest. Book a glass igloo at the Kakslauttanen Arctic Resort to peer up at the night sky from your bed and, while you’re there, be sure to spend some time sweating in their electric sauna—a necessary Finnish experience.

Only a few kilometers west of downtown, Grótta is a grizzly, Nordic nature reserve nuzzled deep within the pocket of the North Atlantic coastline. Excellent for sea and star watchers alike, it’s no wonder Grótta is Iceland’s favourite viewing spot for the Aurora Borealis. When the cosmic scene settles and you’re ready to pack your bags, you can be back in Reykjavík within the hour to check out the nightlife,  with an early night out in Reykjavik usually starting around 1am!

Known for their centuries-old wooden houses and Arctic Cathedral, Tromso is a city to abundant in history. Located on a small, heritage island 300km north of the Arctic Circle, there are very few nights when the Aurora Borealis is not visible. Although often visible from town, your best bet is to take the cable car up the neighbouring Storsteinen mountain. From here, you’ll be able to view one of Norway’s most photographed panoramas.

Filled with log cabins and a campy, rustic feel—think decorative antlers and wooden signs with yellow paint—Fairbanks is a quintessential northern city. For Aurora Borealis viewing, head east to the North Pole and take a stroll down one of the many winter trails that line Chena Lake. (Just be sure to pack a headlamp!)

5 Best NFL Stadiums to Visit If You Love Football

This website uses cookies to improve your experience while you navigate through the website. Out of these, the cookies that are categorized as necessary are stored on your browser as they are essential for the working of basic functionalities of the website. We also use third-party cookies that help us analyze and understand how you use this website. These cookies will be stored in your browser only with your consent. You also have the option to opt-out of these cookies. But opting out of some of these cookies may affect your browsing experience.
Necessary Always Enabled
Necessary cookies are absolutely essential for the website to function properly. This category only includes cookies that ensures basic functionalities and security features of the website. These cookies do not store any personal information.
Non-necessary
Any cookies that may not be particularly necessary for the website to function and is used specifically to collect user personal data via analytics, ads, other embedded contents are termed as non-necessary cookies. It is mandatory to procure user consent prior to running these cookies on your website.
SAVE & ACCEPT
MORE STORIES
Hotels

Inspiration for a Holidays Abroad with Wyndham Hotels & Resorts