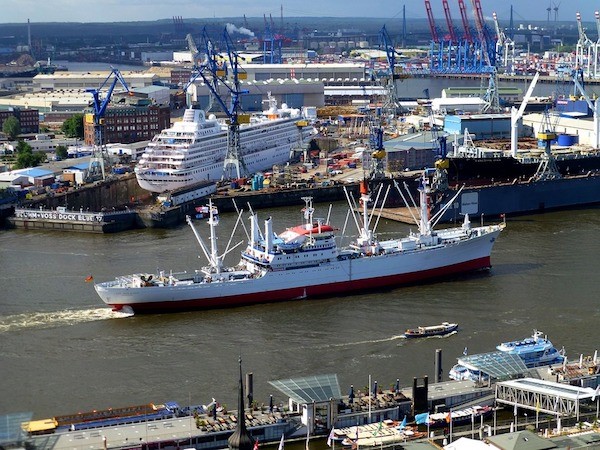 Last week Germany’s Nature and Biodiversity Conservation Union (NABU) released its seventh cruise-ranking with an ongoing very bad and incriminating environmental record for cruise ships and european shipping companies. Most of the ships continue to use heavy oil as their main fuel, consuming up to 150 tons of the poisonous propellant every day. This states a great burden for sensitive, marine eco systems as well as an extremely high fine dust pollution in port cities with cruise and ferry terminals. Particulate filters for the reduction of fine dust emissions that are hazardous to health are still missing. Still, the industry is on the rise and shows signs of growth. In 2016 22 million people worldwide were guests on a total of 300 cruise ships (©Statista). With a rising trend. Which possibilities does the booming cruise industry have in order to process the increasing demand sustainably and to be totally CO2-free by 2050?

Since the summer of 2016 cruise ships that dock in Hamburg are able to use landside power from renewable energy. The diesel motors do not run continually. This is a commendable, environmental friendly alternative, however requiring an upgrade of the existing ships. Even though the power plant is currently only being used by a few of the docking ships, it its still a good start when it comes to reducing the fine dust emissions in the city of Hamburg.

Liquid gas instead of heavy oils

In 2018 the first cruise ships fueled on liquid gas will set their sails. This environmental friendly alternative only applies to new models though. Currently the particle pollution in the air ist still up to 200 times higher than in natural surrounding air, which happens to be highly carcinogenic. The reason for this is that the regulation of pollutants is different on water as it is on land. Liquid gas, the so called LNG, may also be a fossil fuel, that cannot be used endlessly, but it does not cause sulphur oxides or soot particles. In that matter, the emission of nitrogen oxides and CO2 can be reduced significantly.

The japanese NGO Peace Boat set the goal to revolutionize cruising in an ecologic sustainable fashion – with the Ecoship. Solar collectors on a 6,000 sqm surface will produce electricity and with the help of a special cleaning system, 100 percent of used water can be regained. In that way the planners hope to use 80 percent of the energy that would be lost otherwise. The ship’s sails are constructed in a way that they produce up to 10 percent of the ship’s energy. Four different combustion systems out of liquid gas, bio gas, bio diesel and diesel oil will power the ship that can hold 2,000 passengers. Additionally, a garden is planned – for fresh air and relaxation.

Shower of the future

Ten minutes of showering uses up to 150 liters of water. An additional usage of water per passenger for cruise ships. The Swedish start up Orbital Systems designed a shower that saves up to 90 percent water, since it is purified during showering. Conclusion: Only 5 liters of water being used and 80 percent less energy costs compared to a conventional shower. Adding to that, the recycling shower stays completely germ free. Bacteria, legionella bacteria and other contaminations cannot emerge in the water circulation.

CO2 friendly records of cruise ships are not only determined by choosing an environmental friendly fuel. Sustainable interior design elements like furniture, carpets, drapes, valves or lamps can be reusable or biodegradable thus being sustainable. In this way, it is possible to keep this criteria for a sustainable interior in mind from the beginning when building the ship or restoring it.

One possibility to use energy effectively are adaptive facades. These are able to adapt to temperatures, as well as sun and shadow of different climate zones and use these natural circumstances perfectly for heating and cooling of the cabins.

A sustainable advantage for the usage of less fuel on cruise ships is their weight. As far as possible, steel can be replaced with new, sustainable material. Alternatives are, for example, light metal alloys, aluminium foam, carbon fibre or fibre glass, being a fibre reinforced plastic. These materials guarantee more stability, better swimming qualities, lower costs of production, as well as less maintenance costs in the long run.

The goal of the cruise ship industry is, to be completely carbon free by the year of 2050. This goal is ambitious and will only be feasible by consequently turning to hydrogen as a fuel. Fuel cells would provide the needed energy. A requirement for this is the modification of the current ships as well as the corresponding appliances in the new ships.

These diverse examples show that the increase of a sustainable performance of cruise ships has to be highly prioritized. Interaction between the topic of sustainability in all areas and the awareness of using energy efficiently instead of wasting it, will determine its economic efficiency.

The French Polynesia with Variety Cruises