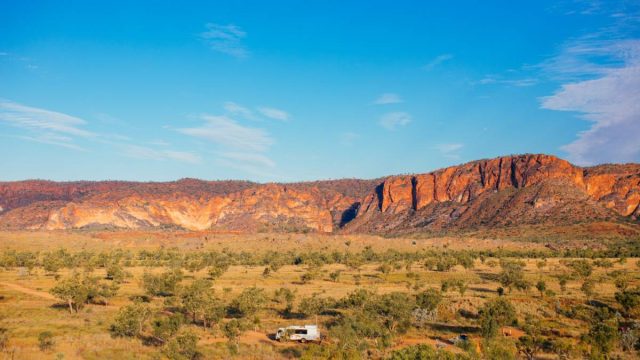 Australia. We know big. It’s actually the 6th largest country in the world, yet it is one of the most sparsely populated.  This means space and lots of it. While it’s almost impossible to do justice to Australia in one, two or even three road trips, you can get a feel for the vibrant culture and stunning surrounds. Let’s continue to think big and talk BIG Australian Icons. Here are five of the best, so get your RV hire in Brisbane sorted and head out to see the sites.

One of the nation’s best-known examples of novelty, big architecture. The Big Pineapple claims to be the world’s largest at 16 metres high and lives in Woombye, Queensland. Now heritage listed, it’s got a cult following including new attractions such as the Big Pineapple Music Festival. Watch this space, it’s getting juicier with more attractions in the pipeline.

Found in Coffs Harbour, New South Wales, the Big Banana is one of the stalwarts of the Big Things scene. Here you find an amusement park set amongst an actual banana plantation. Come for the banana, stay for the toboggan ride, ice rink and water park. Of course, a visit is not complete without a visit to the kitsch-chic souvenir shop to stock up on banana themed goodies that enjoy a cult following.

‘Larry’ the Big Lobster is another big icon veteran, found in Rosetown, South Australia. Originally built to lure customers to the visitor centre and adjacent restaurant, but legend has it that it was mistakenly built giant – with the plans of the original scale misinterpreted. However the designer, Paul Kelly, denies this claim. Nonetheless, the steel-framed, fibreglass crustacean is one of the most impressive and intricate of the Big Things in Australia and a must-see (especially as there is now also wine tasting on offer).

Golburn, New South Wales has a range of historical and cultural attractions, but first one must stop by and say G’day to the Big Merino. At 15 metres high and 98 tonnes, this giant was modelled on a local stud ram known as Rambo. We love Rambo not for his gift shop or wool display inside, but because you can actually climb to the top and look out through the eyes.

Continuing the grand tradition of the Big Things club, the newest kid on the block is in Calen, Queensland. Thongs, or flip flop footwear, are standard in every Australian’s wardrobe, so it was a natural choice to install them in January 2021 to lure tourists into the town off the Bruce Highway to the Calen Hotel.

We love the work that went into these, artist Lionel Knott painstakingly hand-carved them out of locally sourced conveyor belt rubber – for four months!

So there you have it – the best of the big Down Under. Whether you’re here already or planning to make it ashore soon, welcome and welcome to the land of Big Things, there’s so much to explore, so get road tripping!