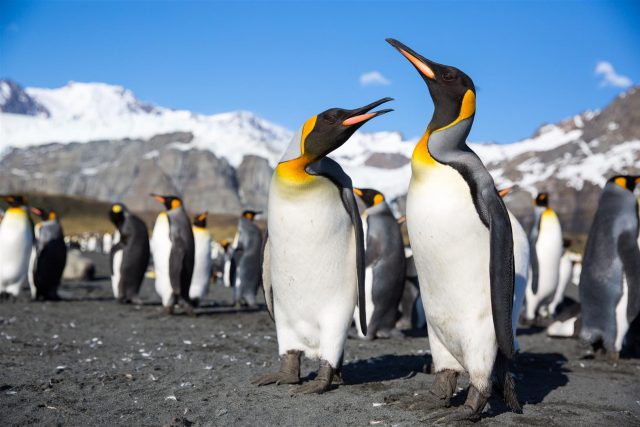 The 2017 southern hemisphere summer season marks a quarter of a century since Aurora Expeditions first took a small group of intrepid adventurers on a breathtaking expedition to the icy continent. Since that inaugural adventure in 1992, Aurora has operated over 200 expeditions to Antarctica, offering guests the chance to discover the continent’s remote wilderness and follow in the footsteps of some of the world’s greatest explorers.

To mark this milestone event, the company has launched a special anniversary expedition. Paying homage to Aurora’s founders Greg and Margaret Mortimer, the expedition to Antarctica and South Georgia also honours a long list of polar explorers and adventurers.

The 18-day voyage will sail from Ushuaia, Argentina, to the Antarctic Peninsula, on board the intimate 54-passenger Polar Pioneer. Daily shore landings offer guests the opportunity to walk along the rugged coastline teeming with wildlife and through the remote snow-capped landscape. In the magnificent wildlife paradise of South Georgia, travellers can expect to see colonies of 500,000 king penguins, feisty fur seals and the wandering albatross – one of the largest seabirds on the planet.

Guests on board the ’25 Year Anniversary’ expedition will receive a series of exclusive added extras, including an anniversary dinner, a commemorative book highlighting photographs and stories of Aurora’s 25-year history, and a polar jacket with a limited-edition anniversary polar explorer’s badge.

The voyage will be led by one of Aurora’s original expedition leaders, Dr Gary Miller, who has been travelling to Antarctica for over 30 years. Gary’s leading team will include a naturalist, an historian and polar specialists.

The ’25 Year Anniversary’ expedition to Antarctica & South Georgia will depart Ushuaia, Argentina on 27 December 2017, concluding on 13 January 2018 in Santiago, Chile.

To celebrate this special anniversary, Aurora Expeditions are offering a saving of up to US$3,000 per couple across a range of voyages during their 25th anniversary season, including the dedicated ’25 Year Anniversary’ expedition. To take advantage of this exclusive anniversary offer, reservations must be made before 30 September 2017. Terms and conditions apply