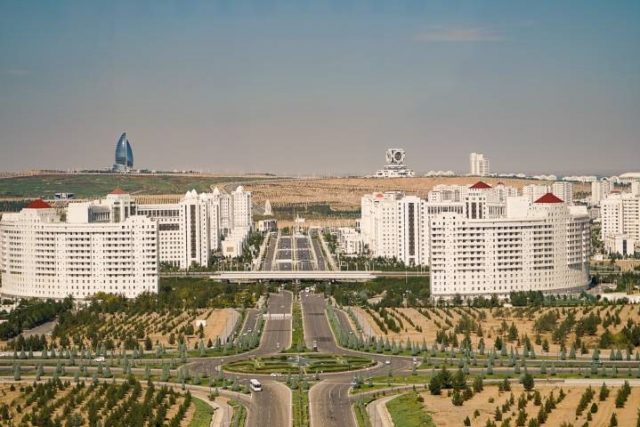 An absolutely amazing country with its own special world. Here the clearly narcissistic rulers erect gold monuments to their favorites, write instructive books on all aspects of life, shoot music videos for their own songs, and deny the presence of the coronavirus in the country. In general, it is like North Korea, with the difference that it is easier to visit North Korea as a tourist – you just need to buy an official tour.

This scheme will not work with Turkmenistan. There are tour operators and tourist visas, but almost no one can get it. This story is not about specific countries, like Syrian can hardly get in the USA. Turkmen equalize all and refuse regardless of citizenship. Turkmen President decided to limit contacts of his subjects with the outside world and does not allow foreigners into the country. It is also difficult for Turkmens to travel abroad.

The Palestinian state consists of two enclaves: the West Bank and the Gaza Strip. A lot of tourists go to the first one – visiting biblical sites, looking at Banksy’s graffiti, or trying Levantine cuisine. The second is a narrow strip of land sandwiched between Israel, Egypt and the Mediterranean Sea. There is not even such a thing as a visit for the purpose of tourism. To enter here – as well as to leave – it is not the most trivial task. The authors of the Lonely Planet backpacker’s bible honestly admit that they couldn’t get there either, and recommend their readers not to even try, citing the difficult military situation.

Until 2005, the situation in the Gaza Strip was about the same as in the West Bank. The Jewish settlements were controlled by Israel and the rest by the Palestinian Authority. Local Arabs even regularly went to Israel to work. There were hardly any tourists in Gaza in those years, but that could be explained by the insecurity of the region. In 2005, the Israel Defense Forces and its citizens abandoned the Gaza Strip – even graves from Jewish cemeteries were removed so that the Arabs would not desecrate them. The following year, the Islamic fundamentalists won local elections and a year later, in a civil war, they took full power in the Gaza Strip. The Islamists began to attack Israeli territories, and Israel, with Egypt, set up a complete blockade of the Gaza Strip by land, sea and air.

For foreigners, this means obtaining a permit not only from the authorities in Gaza itself but also from their neighbors. But it is mainly issued only to journalists, diplomats, and representatives of humanitarian missions.

Not only foreigners but also locals find it difficult to enter the territory of these atolls. The Chagos Archipelago is 700 kilometers south of the Maldives, about midway between Tanzania and Indonesia. The archipelago belongs to the British Overseas Territories, and the official name of the islands is the British Indian Ocean Territory. This is de facto. But de jure, according to the UN decision, Chagos should belong to Mauritius.

The island of Mauritius and the Chagos Archipelago were uninhabited, but they always passed from colonizer to colonizer in pairs. First they were both discovered by the Portuguese. Then Mauritius was settled by the Dutch, who were succeeded by the French, who also received Chagos as a bonus. Under the French in the 18th century, the first permanent residents appeared on Chagos. They were African slaves and Indian wage laborers who came to work on the coconut plantations. In the early 19th century, Britain invaded Mauritius and received Chagos as a burden.

In the late 60’s and early 70’s, the British began to build a joint military base here with the Americans, and all the inhabitants were deported to Mauritius. Now the entire population of the archipelago is military and base personnel. Naturally, there are no voyage transport or even cruise ships, and if you suddenly want to sunbathe on the snow-white beaches of Chagos, you have to get permission to travel and then get on a private boat from the Maldives.

Where are the Best Swimming Pools in the World?

Reconnect & Relax: in a ‘Stay One Degree’ Family Property

3 Interesting Destinations You Need to See