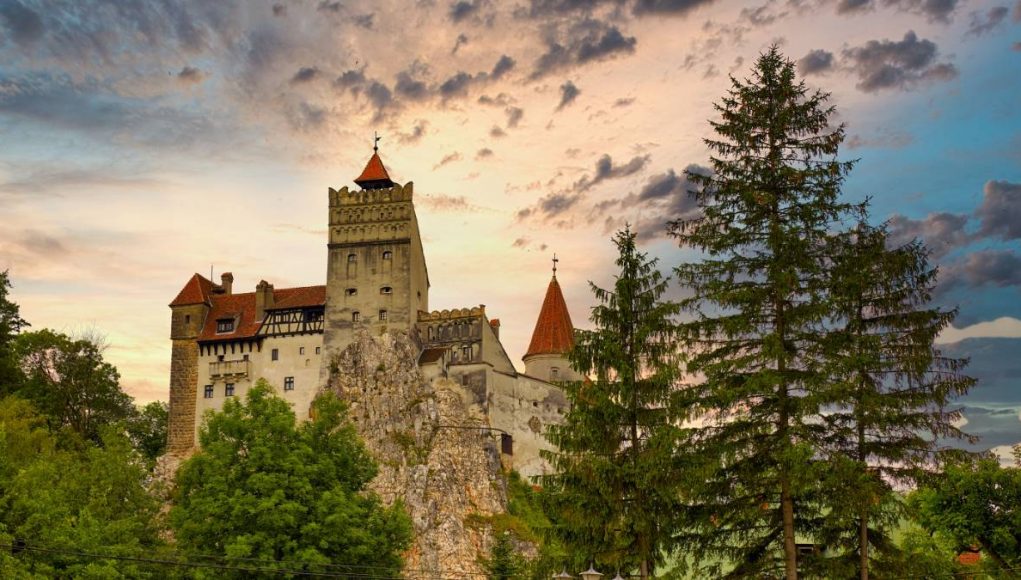 If you’re a fan of Bram Stoker’s 1897 gothic novel Dracula, or any of the movies, games, and other media it’s spawned, you’ve probably imagined yourself in his spooky old castle. You can get close to making that dream a reality on a visit to Transylvania – but rather than falling for the charms of the wily Count, you’re likely to fall in love with one of the lavish B&Bs near the historic Romanian landmark.

From the outside, Bran Castle, better known as Dracula’s Castle, looks like a fitting home for the king of the vampires. However, you won’t find a Hammer Horror-inspired theme park on the inside. The privately owned castle in the picturesque village of Bran houses a museum dedicated to royalty, but that person was Queen Marie of Romania.

We know what you’re thinking – how could Dracula’s Castle not be dedicated to the Stoker character or his historical namesake, the national hero whose actual name was Vlad Tepes? There’s a good reason for this. Vlad Tepes, AKA Vlad the Impaler, never lived in the castle (unless you consider possibly attacking it or spending two nights imprisoned in it as ‘living in it’).

Of course, those few pesky historical facts have not prevented the people of Bran from offering tourists a ghoulishly good Transylvanian jaunt. The castle has been associated with Dracula since the 1960s, and it’s an association many villagers are happy to keep going precisely because it attracts tourists.

One of the most-asked questions about Dracula’s Castle is how it came to be associated with the figure who loosely inspired Stoker’s vampiric count. Local historian Nicolae Pepene told National Geographic that it came down to tourism.

Pepene said that, in the 1960s, the Romanian government wanted to promote a location that had associations with the infamous Impaler. The problem was that Vlad’s home, Poenari Castle, lay in ruins. The government knew about the historical figure’s tentative links to the picturesque Bran Castle, which is perched on a mountain pass between Transylvania and Wallachia 126km away from Poenari Castle, and the rest is modern history.

Why Visit The Castle?

Bran Castle may not contain any vampires, but it’s certainly worth a visit. Construction of the stone edifice we know today as Dracula’s Castle began in the late 1300s, and from the outside, it certainly looks like it could be the home of the dark prince.

Enter the 57-room castle, and you’ll learn about its colorful history, including periods in which it functioned as a defense against the Ottomans and as a customs point. You can explore gracious apartments, a library with wooden panels and a secret stairway, the old armory, and a courtyard in which you’ll find a well.

Queen Marie takes center stage, of course, as Bran Castle was her home between 1920 and 1938. The queen, a granddaughter of Queen Victoria, described her enjoyment of the solitude it provided. In 2006, ownership of the castle passed from the state to the queen’s grandson, archduke Dominic von Habsburg.

Beyond the walls of Dracula’s Castle is a village filled with paraphernalia, souvenirs, and activities related to the fictitious and the historical Vlads. If you want plastic vampire fangs, toothy beer steins, bottles of ‘blood wine,’ gothic t-shirts, and tours that might end with vodka ‘blood shots’ at Dracula’s Castle, you won’t need to look far to find them.

If you can pull yourself away from the horror-schtick for long enough, you can also explore the mediaeval and village museums, shops, restaurants, and surrounding countryside. A dinosaur park, a bear sanctuary, and Palamari’s Cultural Center are not far from the village. As for accommodation, you’ll find that, unlike the vampire count, the people of Bran know how to treat guests.

Lavish B&Bs Near The Castle

You’ll find many B&Bs, boutique hotels, self-catering options, and other accommodation in and around the village of Bran and its famous Dracula’s Castle. Sadly, staying in the castle is not an option at this stage.

Possibly the next-best option is Conacul Törzburg, which is across the street from the castle. The establishment has a restaurant, bar, terrace, and garden, and its comfortable rooms have flatscreen TVs, kettles, and private bathrooms.

A mere four-minute walk from the castle is the stylish Zara Chalet. The wood and stone of the interior gives the guesthouse a cool, calm atmosphere, which you can take to the next level by spending some time at its spa center, which boasts a hot tub and sauna.

Conacul Brătescu, an authentic Romanian mansion furnished in traditional style, is a 10-minute walk from the castle. The B&B’s traditional vibes extend to the rooms and restaurant, which offers home-style dishes and a range of wines.

The Transylvanian Inn Hotel, a family-owned establishment that welcomed its first guests in 2006, is in the nearby village of Predelut. Apart from great hospitality and comfortable rooms, the hotel boasts a restaurant that reinterprets Romanian cuisine in fresh ways. You’ll also find a tower at the hotel which makes the most of its breath-taking views of Dracula’s Castle and the Carpathian Mountains.

If you’d rather stay in the beautiful countryside around Bran, consider heading to Hanul Simon. The establishment is 2km from the castle, and like Brătescu Mansion, its restaurant serves traditional Romanian dishes. The inn’s accommodation options include double and triple rooms, apartments, and a chalet.

Shape-shifting vampires who can control the elements may be the stuff of myths, legends, and best-selling fiction, but you’ll have no trouble believing all that stuff in Transylvania’s incredible countryside.

This bucket list destination is a must, and if you look beyond the Hollywood-inspired fun, you’ll find warm people, a fascinating land, and a history far more interesting than you possibly realized.

5 Reasons to Visit Croatia by Boat