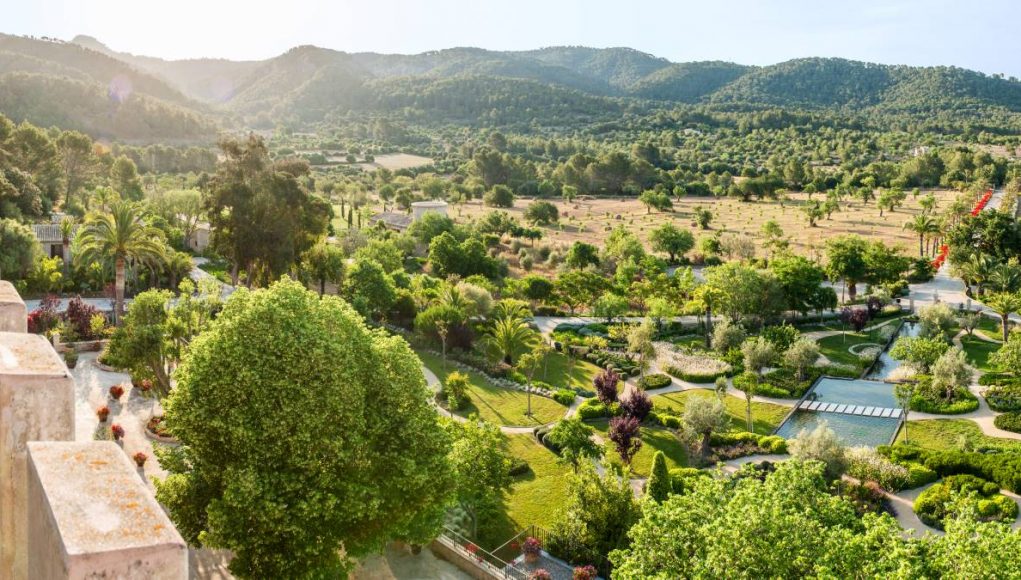 The team at Castell Son Claret in Mallorca has not been resting on its laurels during the unexpected downturn in the international travel business over the past 12 months. Instead the team has been considering what luxury leisure travellers will be looking for in the future and how the 326-acre country estate can meet the renewed demand for suite accommodation that provides the reassuring comfort of space, nature and privacy.  The result is the addition of four new Garden Suites, a new ‘garden service’ dining option, and a fresh new gourmet restaurant, Sa Clastra, named after the traditional central open-air patio or cloister at the heart of Spanish castles such as Castell Son Claret.

Castell Son Claret opened its four new garden suites in time for the start of the season at the end of March 2021. Each of the four 75 square metre suites has a light-flooded living area, large bedroom and spacious bathroom. Floor-to-ceiling windows allow an uninterrupted view of the breath-taking landscape of the Tramuntana mountain range that hugs the Castell estate, bringing nature right to the doorstep.  The elegant, modern design and the interior décor of the suites are by the well-known Spanish design firm, Decagono and Juncosa, giving the new suites a modern lightness. Some design highlights, such as the elegant lounge table by the American modernist designer, Warren Platner, or the lounge chair by Cassina, take their inspiration from the mid-Century style of the 50s and 60s, when Mallorca became the glamorous meeting place for the international jet set.

Castell Son Claret’s large estate and the surrounding countryside provides plenty of outdoor space, naturally allowing for ‘distancing’.  To complement this, the hotel recently introduced a new dining concept, ‘Garden Service’, whereby guests can order food and drinks from their room service menu to be delivered to one of the many private corners of the hotel’s grounds and gardens.

Aiming to take the stress out of summer 2021 travel arrangements so that guests can take pleasure in planning their holiday, Castell Son Claret offers a ‘door to door’ arrival service; meeting guests at the airport and escorting them directly to their private car for an exclusive 25-minute transfer to the hotel.  The team can also arrange for hire cars to be delivered directly to the hotel, negating the need to visit car hire offices. Should guests require assistance with a COVD-19 test before returning home, Castell Son Claret can take care of all the arrangements.  PCR tests can be administered at the hotel and sent to a local lab for quick turn-around, with results sent directly to guests’ mobile phones.

“We realize that our British guests might not be ready to return to Castell Son Claret just yet, but it is our heartfelt wish to reassure them that we are here, looking after our historical and human heritage, and preparing for their return to Mallorca whenever they are ready,” commented Björn Spaude, Managing Director of Castell Son Claret. “This year, we have extended our season until the end of November, so there are more opportunities than ever to plan a break.”

An exciting new chapter in Castell Son Claret’s culinary history began last month with the opening of Sa Clastra, an al fresco gourmet restaurant led by talented young chef, Jordi Cantó.  From 10 June 2021, local residents and non-hotel guests will be able to dine on the open-air patio of the hotel’s main building.  Sa Clastra is a fine dining experience that captures the tastes, sight and aromas of classic dishes from around the world and reinterprets them using ingredients supplied by local producers on the island. Sa Clastra honours the heritage of the slow food tradition, bringing lamb reared in the pastures close to the hotel, oranges from Sóller in the north, cuttlefish from Port Andratx, and lemons from Castell Son Claret’s own estate.

A native of Mallorca and champion of its culinary heritage, Jordi Cantó honed his skills working in the kitchens of some of the most famous restaurants in Spain, including Nerua restaurant at the Guggenheim, Bilbao; DiverXo in Madrid; and the two-star Casa Macial in Asturias.  Jordi’s most recent training ground has been Castell Son Claret itself, where he worked for many years in the kitchen of Zaranda, the hotel’s previous two Michelin star restaurant.

“Mallorca has inspired generations of chefs, artists, poets and writers, and this latest generation is no different. Jordi has an exciting and energetic new approach to gastronomy, curating an elegant new dining experience that honours the soul of our historic building and the culinary heritage of the wider island community in Mallorca and neighbouring islands,” commented Björn Spaude, Managing Director of Castell Son Claret.

Sa Clastra at Castell Son Claret serves dinner five nights a week.  Two gourmet tasting menus will change according to the rhythm of the seasons and what is available locally. A wine pairing option will continue the exploration of fine Mallorca produce, with suggestions from smaller private and family-run cellars on the island.  Sa Clastra will be located in the large central patio at Castell Son Claret, where diners will sit under the night sky, cosseted in the warm glow of soft lights reflected against the ancient stone of the castle walls.

The top 5 summer destinations in Germany

Portugal is Open for US Travelers!

Monaco is FOR YOU – At Last! Visit Monaco