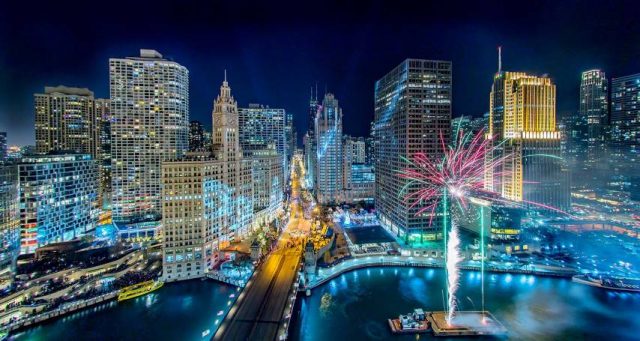 Happy kids of all ages will return to Michigan Avenue on Saturday, November 20 for the 30th Annual BMO Harris Bank Magnificent Mile Lights Festival®. This official start to the holiday season is produced by The Magnificent Mile Association. The festive, free weekend filled with family-friendly fun culminates with the memory-making parade as Mickey Mouse and Minnie Mouse from Walt Disney World® Resort magically illuminate more than one million lights on 200 trees adorning Chicago’s famed boulevard.

Founded by Eli’s Cheesecake executive Marc Schulman and business leaders from The Magnificent Mile Association in 1991, the 30th Annual BMO Harris Bank Magnificent Mile Lights Festival® returns to its live parade format this month, after a television broadcast-only version in 2020 due to COVID-19. In addition to celebrating the parade’s historic anniversary, Mickey Mouse and Minnie Mouse mark the 50th Anniversary of Walt Disney World® Resort with their appearance, and The Wrigley Building celebrates its centennial year.

“Thirty years ago, we came together to create an event to make the Saturday before Thanksgiving a major day for shopping, dining and hotels on The Magnificent Mile,” says Schulman. “We are thrilled to have the support of so many key sponsors and officials who are helping us return after a very difficult year. Together, we will begin the holidays with light and happiness, and I’m proud to have seen this event grow into one of the nation’s premiere ways to celebrate the holidays.”

Then, on Saturday between 11 a.m. – 4 p.m., Lights Festival Lane (Pioneer Court – 401 N. Michigan Ave) hosts a variety of family-friendly activities including Subaru’s Share the Love pet adoption event in partnership with PAWS Chicago, a photo opportunity with Eli’s Cheesecake Company’s 30th anniversary Lights Festival cake and cheesecake for guests, and live DJ entertainment. While there, families may capture a photo with Santa Claus and get free, temporary holiday tattoos in the BMO Kid Zone, Lifeway Kefir giveaways, and more.

Watch for new floats designed by Chicago Public School students from UPLIFT Community High School and Curie Metropolitan High School in partnership with BMO Harris Bank and T-Mobile.  Championed by BMO Harris Bank, this new partnership with Chicago Public Schools’ Department of STEM and the Department of Arts Education was created to bring a real-world work-based STEAM design challenge to the students.  The floats will be built by Mardi Gras-float builders New Orleans-based Kern Studios and debut live in the parade.

Also new this year to the parade route is the balloon debut of Bumble, the Abominable Snowman (from 1964 TV special Rudolph the Red-Nosed Reindeer) sponsored by Special Olympics Illinois, plus four high school marching bands from Ohio, and The Pack – Official Chicago Sky Drum Line.

Celebrity appearances along the parade route include one of the most renowned groups of all time, Kool & The Gang who will perform Celebration, a fitting song for the occasion. The diverse entertainment lineup also includes the American hip hop/pop rap duo from Atlanta, Tag Team, plus Broadway artist Deborah Cox, and American Idol finalist and Illinois native, Grace Kinstler.

Additional performers appearing during the television broadcast-only will include the cast from Broadway in Chicago’s upcoming production of Frozen, Chicago Theatre’s Cirque: Twas the Night Before, Chicagoland dance teams and Teatro ZinZanni.

Santa Claus presented by Enjoy Illinois soars down the route to officially signal the start of the holiday season before the grand conclusion featuring a spectacular fireworks show shining over the Chicago River.

How To Watch From Home

The parade will air on ABC 7 Chicago on Sunday, November 21 at 6 p.m. CT, Saturday, December 11 at 6 p.m. CT, and on Christmas Day at 8 a.m. CT. Additionally, the 30th Annual BMO Magnificent Mile Lights Festival® broadcast will air in 193 markets around the country throughout the holiday season, reaching nearly 100% of the country, plus Toronto, Canada, with repeat airings in multiple markets.

The nationally televised event will be hosted by ABC 7 Eyewitness News Anchors Alan Krashesky and Cheryl Burton on Sunday, November 21 from 6-7 p.m. CT on ABC 7 Chicago. Anchors Val Warner and Ryan Chiaverini will capture magic from the street. The broadcast opens with a performance from Broadway in Chicago’s Frozen and closes with a performance from Kool & The Gang.