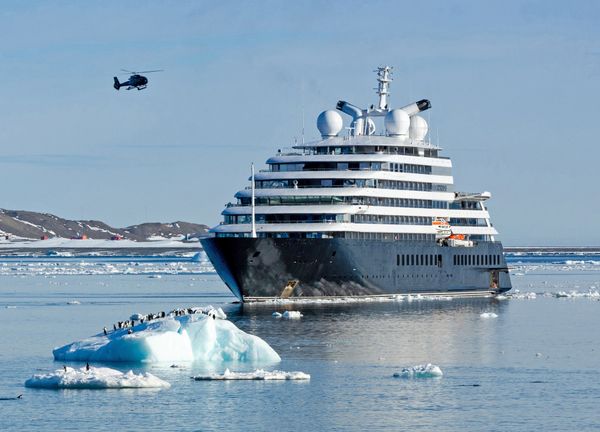 Scenic Eclipse is making its way to Antarctica from the Red Sea as it prepares for its highly anticipated return to the Antarctic peninsula for a January thru March season of exploration. This marks a significant milestone for the luxury truly all-inclusive operator of the World’s First Discovery Yacht™ as it resumes its scheduled 2022 sailing program for the first time since the beginning of the pandemic and will be among the first ships to return to Antarctica. Scenic Eclipse will operate several scheduled sailings in the region, 13- and 19-days in length.

Jason Flesher, Scenic Discovery Yachts’ expedition operations manager, comments, “We’ve been planning this Antarctica season for months and we can’t wait to head back to the White Continent for a season of luxury and discovery. Thanks to the size and capabilities of Scenic Eclipse, we’ve been able to secure exclusive landings in Margarite Bay, a southern destination that very few ships can visit.”

The 13-day Antarctica in Depth takes guests along the Antarctica Peninsula, just above the Antarctic Circle. Highlights include traversing the stunning 11-kilometer-long Lemaire Channel, lined with steep cliffs and filled with icebergs; visiting a working scientific base to discuss life in these harsh conditions with the staff (when conditions permit); exploring the remnants of a derelict whaling station and a vacant British base or climbing to the rim of a volcanic crater; taking Zodiacs around ice formations; and paddling among the icebergs in kayaks and stand-up paddleboards. And learn from the 20-strong Specialist Polar Discovery Team as they give engaging and educational lectures about Antarctic history, geography and its ecosystem – and lead shore excursions. Guests can also explore below the horizon aboard Scenic Neptune, the ship’s six-guest submarine, taking in the wildlife and scenery beneath the continent’s icy surface, or explore above the horizon on one of the ships two state-of-the-art helicopters with a bird’s eye view of the truly breath-taking landscape far removed from the touch of humans.

The 19-day Antarctica & South Georgia adds five days to the Antarctica itinerary, exploring the historic and wildlife-filled island of South Georgia. Despite being such a small outpost in the vastness of the South Atlantic, the sea around South Georgia is one of the liveliest areas on earth with an abundance of marine life. Explorer Ernest Shackleton and five of his crew sailed from Elephant Island in the James Caird for 16 days and 1,300 kilometers and finally found safety in the tiny entrance of Cave Cove. Home to millions of seals, whales, penguins and seabirds, the island is also home to the King Penguin, so named as they can grow to a height of 39”, second only to the Emperor Penguin, and numbering nearly 500,000. A significant treat for guests joining Scenic Eclipse for its recommencement season is the opportunity to be the first to be wowed by a new underwater experience – as the ultra-luxury Discovery Yacht is set to become the first to operate a submarine in the waters of South Georgia Island.

As the Antarctica season comes to a close in March, Scenic Eclipse will then venture across the Atlantic, sailing from Rio de Janeiro to Lisbon, to commence her first ever Mediterranean season.

The Countdown to Antarctica 2022/23 Begins with Aurora Expeditions

This website uses cookies to improve your experience while you navigate through the website. Out of these, the cookies that are categorized as necessary are stored on your browser as they are essential for the working of basic functionalities of the website. We also use third-party cookies that help us analyze and understand how you use this website. These cookies will be stored in your browser only with your consent. You also have the option to opt-out of these cookies. But opting out of some of these cookies may affect your browsing experience.
Necessary Always Enabled
Necessary cookies are absolutely essential for the website to function properly. This category only includes cookies that ensures basic functionalities and security features of the website. These cookies do not store any personal information.
Non-necessary
Any cookies that may not be particularly necessary for the website to function and is used specifically to collect user personal data via analytics, ads, other embedded contents are termed as non-necessary cookies. It is mandatory to procure user consent prior to running these cookies on your website.
SAVE & ACCEPT
MORE STORIES
USA