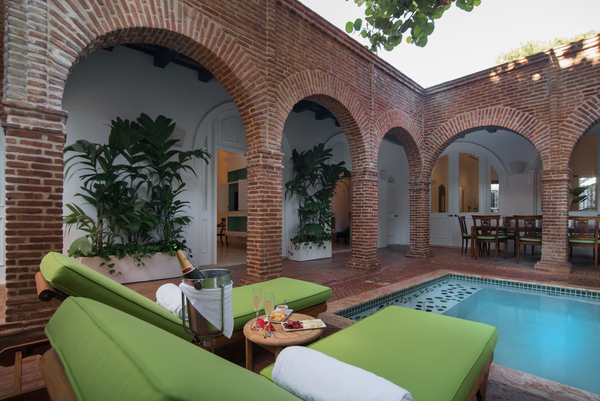 Casa Antillana, the latest addition to the exclusive, high-end collection of restored colonial homes of Casas del XVI, opened its doors to the public on September 1st. Unlike its sister properties whose structures date back to the 16th and 17th centuries, Casa Antillana’s structure dates to the end of the 19th century and beginning of the 20th century. However, its historical significance remains important because it was once part of a greater structure.

“The land where this house is located originally belonged to the Friars of the Order of Santo Domingo, whose main buildings, specifically the temple and the convent, where located just north of the house,” states Jose Batlle, architect leading the restoration of the house.

In the second decade of the 16th century, city officials granted occupation of these lands to the Friars making it one of the first monasteries founded in the Americas by Spanish settlers. A masonry wall surrounded the convent, the temple, and the property on which the house now stands to protect the orchards and animal pens created for sustenance of the religious order.

Today, Casa Antillana remains within walking distance to the historical structures of the temple and convent that once belonged to the Friars of the Order of Santo Domingo.

Every house from the collection of Casas del XVI holds its own unique décor theme. Casa Antillana received its name from the recreation of former Antillean homes with touches of tropical décor, elegance, and Caribbean vibrancy.

Antillean homes originated in the Antilles Islands and were the property of affluent families. The homes were characterized by their interior elegance giving off a sense of graceful living. Antillean living room areas and bedrooms were decorated with handcrafted furniture embossed with tropical silhouettes made from the best wood to flaunt the owner’s social economic status. 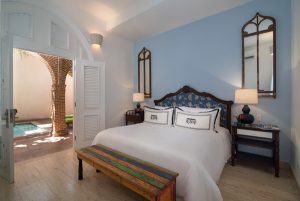 Casa Antillana embodies that same elegance and vibrancy from a long-gone era with its combination of textures of wood, wicker and other natural materials. All the bedrooms have a distinctly spacious personality emanating from tall doors painted in white and intermixed with touches of green elements. The furniture made of locally handcrafted wood is embossed with hints of tropical prints, such as palm trees and exotic Caribbean fruits. Commodious bathrooms offer ample natural light, hand painted wood floors and restored antique bathtubs.

The living room area has a tropical ambience with wicker and rattan sofas which have been designed specifically for this home.  The intimate dining space is anchored by an antique English mahogany table in the center of the room, while the succession of arcades are painted white to emphasize the whitish marble floors.

With the addition of its fifth home, Casas del XVI now offers guests an intimate escape with 14 rooms interspersed between five private homes located in the ancient Ciudad Colonial (Colonial City).  Guests who stay at Casas del XVI will be wooed by the private attention from a butler, a chef, and a concierge, as well as have access to the lounge areas of the different houses that form part of the hotel, including Casa Antillana. The new home offers discerning travelers an extravagant oasis complete with two luxury rooms and one superior room embracing a lush interior garden anchored by a large sea grape tree and an ornate plunge pool.