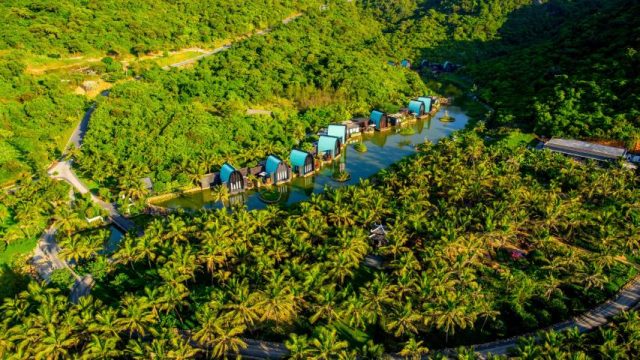 Paying homage to its 75-year history, we look at how the design of InterContinental Hotels & Resorts has captured the allure of international travel for luxury guests today and through the years. Since its inception, the brand has evolved its architecture and design to stay ahead of the changing needs and tastes of its guests.

InterContinental hotels are shining examples of some of the best contemporary architecture or cultural heritage sites, from historic buildings to city landmarks and immersive resorts – and always in the most sought-after locations.

Historic buildings that are architecturally significant to the local environment or national history are often a destination in themselves. InterContinental Lyon – Hotel Dieu is set in a former hospital building alongside the Rhone river. Dating back to the renaissance period, it is one of the city’s most emblematic historical landmark buildings. At the time of its construction, many people were surprised by the juxtaposition of the building’s palace-like architecture and its function of medical care for the workers of Lyon. Charged with the design transformation of the building was Studio Jean-Philippe Nuel, along with architects AIA Architectes and RL&A.

“My approach with this project to draw on the history of the place; not in a superficial way by trying to reproduce or copy elements of decoration, but rather by perpetuating the spirit that guided its construction in the 18th century,” says Nuel. “The dichotomy of its past was reflected in the interior, with a very richly decorated Dome, while other aspects have an air of the monastic. When I redesigned the place, I wanted to maintain this play of contrasts without ever falling into ostentatious luxury, which would have been out of place in relation to the history of Lyon.”

InterContinental’s approach to new-build properties is to develop iconic architecture combining consistent global standards with the distinct culture of each location. The hotel location and its local history provide a rich source of design inspiration, combined with the possibility to design a space with a sophisticated guest experience front of mind. Designed by celebrated eco-architect, Bill Bensley, InterContinental Danang Sun Peninsula Resort is influenced by nearby temples. The rooms have traditionally crafted touches, including carved panels of merawan wood, richly embroidered silks, and custom-made ceramic tiles.

“For the design I was inspired by all the best parts of Vietnamese vernacular architecture, combined with some wilder elements, such as a bar designed by an aristocratic monkey, a banana yellow cinema and what many travel magazines have penned as the most exciting toilets in the world!” says Bensley. “The result is a whimsical realm spread across four levels – Heaven, Sky, Earth and Sea – taking advantage of the incredible vistas from the mountaintop and the pristine beach.”

Bill Bensley is also working on InterContinental Khao Yai National Park, a 61-key property that will occupy a 100-acre site enveloped by 50,000 trees and with views over seven lakes. The hotel is around a three-hour journey from Bangkok and is set to open at the end of 2021.

InterContinental Shanghai Wonderland was the brand’s 200th hotel, opening in 2018. It is built into the sidewall of a formerly abandoned quarry in Southwestern Shanghai, but the location is not the only unique thing about this hotel. The structure extends two storeys below ground, with an underwater restaurant and guest rooms that face an aquarium. A swimming pool and water sports facilities sit on the quarry floor, and guest rooms climb 14 storeys up the side of the quarry face. the hotel’s top floors connect to a glass-bottomed walkway, which leads to a cantilevered sports hub for bungee jumping and rock climbing. Architect Martin Jochman wanted the hotel’s exterior to reflect the landscape around it; a glass atrium runs along the full height of the building, mirroring the waterfall that cascades down the opposite side of the quarry. Designers Cheng Chung Design also took inspiration from the topography to come up with the concept of ‘Adventure to the Centre of the Earth’. Highlights include a grand lobby with curved, striated walls and a circular rain shower-type waterfall on which LED lighting effects are projected; all contributing to the wonder of the hotel.

In the early days of the brand, there was one person largely responsible for the look and feel of InterContinental hotels. From 1961-86, Neal Prince was the Staff Vice President of Interior Design Division for the then InterContinental Hotels Corporation. He led the design and opening of around 154 hotels across the globe. Prince was famed for creating the “look” of the InterContinental of the time, while also working with local materials, artists and craftsmen to refine the feel in line with the destination, always with creativity, ambition and luxury the common thread. His work gained him great global acclaim and influence and became a reference point for those in the industry, even long after he retired. His first design was for the Phoenicia InterContinental Hotel (now InterContinental Phoenicia Beirut) in Beirut Lebanon, including its original and iconic oval swimming pool with a bar beneath it, where glass windows provided a view of the pool. His final work is still a favourite of InterContinental guests – The Willard in Washington DC, which reopened as an InterContinental in 1986.

The spirit of combining the InterContinental philosophy, the vision of the architect and designer and the inspiration by the location continues today.

Jean-Philippe Nuel comments, “InterContinental’s philosophy, which is location-centric, culturally local and also open to the world, is very close to my personal vision of the hotel business, and I believe is why it is so well-received by both guests and the design world.”

Upon its launch in 2019, InterContinental Lyon – Hotel Dieu was the recipient of the prestigious global Gold Key Award for excellence in hospitality design.

Behind the pioneering spirit, elegance has always been at the heart of design choices, ensuring that layers of discovery and comfort reveal an unparalleled level of sophistication. Familiarity from one hotel to the next is evoked through thoughtful design choices and respect for the craft and culture of the destination. InterContinental Hotels & Resorts have been delivering discreet luxury for 75 years and counting, it’s where luxury is a state of mind.

Q at the Empress Reopening October 1