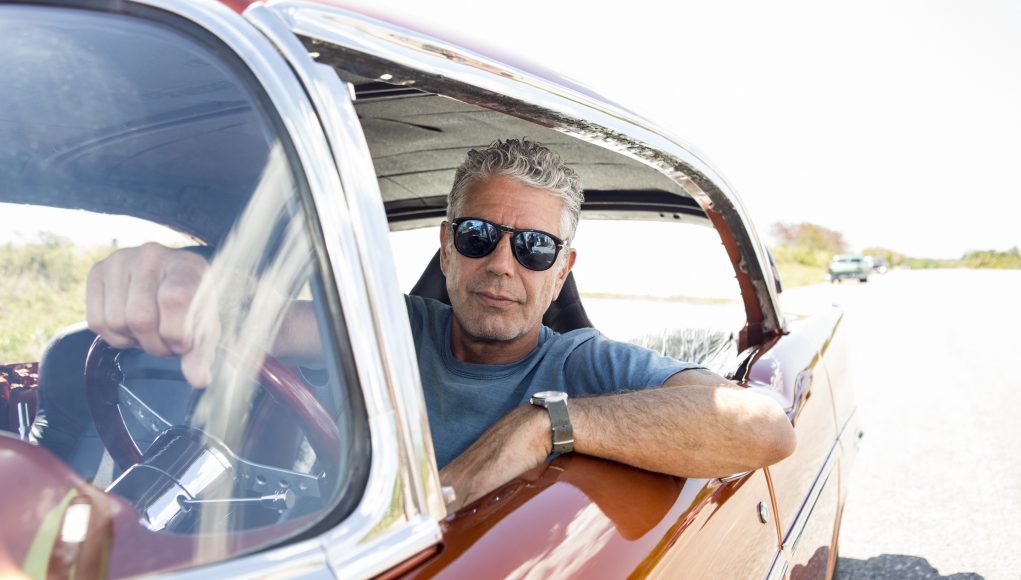 I have always dreamed of living in Italy; perhaps a charming, slightly crumbling Italian villa set in a quaint seaside village, carved into the steep Amalfi Coast; Maiori and Atrani always instantly come to mind. Postcard perfect, right? I thought so. Then, in 2011, after watching possibly my favorite episode of The Layover, Anthony Bourdain opened my eyes to a whole other Italy; a modern Rome. A delicious maze of a city that was pulsing with history, iconic landmarks, passionate Romans and mind-blowing food. And his narrative spoke to me too, “Ideally you visit Rome slowly. You sit, you stroll, you take it as it comes. You don’t go see stuff, you let it slip up on you – one piazza, one fountain, one amazing structure at a time.” In that single episode, I simultaneously fell in love with porchetta, Italian Hawaiian pizza, a classic 1970 Fiat Cinquecento and modern Rome. Now five years later, sitting by the pool of the Ritz-Carlton Grand Cayman with Anthony Bourdain at the Cayman Cookout, I really didn’t want to talk about food. After watching him for two days on the Cayman Cookout stage and two decades on television, I felt like I understood his food philosophies. I am happily drawn to his edgy wit, unapologetic sarcasm and palpable love for foreign lands and authentic people. I wanted to talk about that. And so we did, and yet, because food is inextricably woven into the fabric of Anthony Bourdain’s life, it permeated every part of our conversation. And you know what? I learned a lot. A lot about Anthony, food, and why being at the Cayman Cookout is so important to him, and symbolic of where he is at this juncture in his life.

True story. Anthony Bourdain has never traveled the easy street (or taken the high road) to anywhere. Long and publicly regarded as the black sheep of the culinary world, I personally think he is one of the reasons chefs have become such rock stars. He puts it all on the table, literally and figuratively, and doesn’t care if you like it or not. He has taught us about strange foods, faraway cultures, and how to eat – really eat.

However, in the last decade, his life took a sharp right turn into parts unknown – and it wasn’t a TV show but a life-changing reality. In 2007, at the age of 51, Anthony became a husband and a father and started to take a hard look at his life, in earnest.

“At no point before the age of fifty was I able, prepared or up to the job of being a father. Any parent would agree. Once you have a child, you are no longer the star of your own picture. After five decades, to finally realize that on a truly cellular level, you are no longer the center of the universe was a huge relief for me.”

One of the most watched culinary celebrities in history, today Bourdain has a very carefully calibrated life; and although he still travels a lot, Anthony is home much more than he used to be, so that he can spend time with his wife and daughter. Instead, he takes great pleasure in possibly nurturing the next generation, but only if she’s into it. Eight-year-old Ariane Bourdain loves to cook, and especially with her dad, when she can get her hands squishy and dirty. “Look, my daughter grew up Italian, basically with her mom, but also grew up with a lot of unusual foods on the table. So, she eats raw oysters and likes octopus, and understands the bunny is cute, but it also tastes good.”

I asked Anthony whether or not all the responsibilities that come with being a parent keep him up at night. He laughed out loud. “I am a little weirdly, over enthusiastic about expressing love through food, I think. Cycle menu is a little weird for an eight-year-old. And I plan. I have prep lists for the summer. What the f–k? I am feeding a child. But I get over organized and I invest a lot in passing along these powerful food memories that I enjoyed as a kid. But I have had to learn to not get offended if she doesn’t like something that I make her.” The laughter faded, he paused for a few moments, and then offered up something tender and serious. “Look, I say that all I can do as a parent is to let my daughter know that she is always loved. That she will have high self-esteem and high regard. Also, she has been training Jiu Jitsu for four years, so she’ll be able to take care of herself. So yes I am a doting dad. I’m a very happy dad.”

Anthony’s Italian wife, Ottavia Busia doesn’t cook at all. It might have something to do with the fact that she is very health conscious, and doesn’t eat starches or carbohydrates. She is a competitive athlete, coach and trainer in the sport of Jiu Jitsu. Anthony credits the sport, and his wife who coaxed (or tricked) him into the introductory Jiu Jitsu lesson, with changing his life. “I was a chain smoker, thirty pounds’ overweight and never been to a gym, like ever in my whole life.”

I asked him about that first Jiu Jitsu class. Was it bad? “Yeah, it was f–king awful, but I survived it. And I was proud of myself for surviving it. It was hard with a steep learning curve. An endless learning curve and that is attractive to me.

Anthony got healthy over the course of learning and practicing Jiu Jitsu, dropping those thirty pounds and changing other aspects of his lifestyle. But as he sees it, it was never really about getting healthy – that was just a happy side effect. For Bourdain, it was all about the curve. “I am a big believer in the Japanese notion of Shosin, which means Beginner’s Mind.” In a nutshell, Shosin is the Buddhist practice of always learning, from a beginner state of mind. “For me, Jiu Jitsu is like being the worse cook in the kitchen, all over again. You are faced with a steep hill of things you must learn everyday, and I don’t know why, but that makes me happy.”

Bourdain travels for a living. One might argue that the travel aspects of his television shows, No Reservations, The Layover and Parts Unknown, are more appealing to viewers than the food he eats along the way. He admits that he still travels about 200 days a year and has rules and rituals in how he travels, and with whom.

all-American version these days. “When it comes to family vacation, I take an indecent pleasure in feigning normalcy. Meaning, I load up the car with the luggage, we drive to Long Island to the Hamptons, where I rent a house for August every year. I barbecue in the backyard, and I do whatever my daughter wants to do. She makes all the decisions for the entire month.”

Does Anthony Bourdain have daddy brain? When he told me that this new book, Appetites: A Cookbook is a family cookbook, I honestly thought I had heard him wrong, and asked again. “It is all stuff that I cook at home but hey, we are a very wacky family. The cover design is by Ralph Steadman (Fear and Loathing in Las Vegas) and with photography by Bobby Fisher, it is game changingly strange.”

Swing Your Clubs in The Dominican Republic