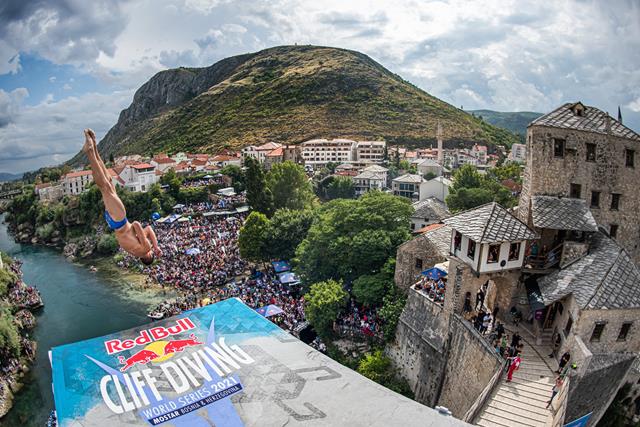 It’s one highlight after the other in this cliff diving summer of 2022 as the fourth competition in the men’s produced the fourth winner while in the women’s it’s the consistency and the increasing dive difficulty that keeps the fans flabbergasted and the sport’s world euphoric. When 24 of the world’s best cliff divers return to Stari Most, the iconic humpback bridge in Mostar’s old town, nothing less than a firework display of high diving top performances can be expected.

In 2022 the World Series’ 7th visit to this UNESCO World Heritage Site marks the start of the second half of the season and the cliff diving elite will be welcomed by a new platform design inspired by the local building tradition.

Drama is nothing unknown to this World Series classic: for three years in a row between 2017-2019, Stari Most played host to the penultimate stop of the season, a crucial point at which pressure can make or break an athlete’s season and in 2021 it was a dive directly from the bridge and pouring rain which added extra spice to the spectacle.

The bridge across the emerald water of Neretva River is not only Bosnia and Herzegovina’s most recognizable landmark but also a test of aerial awareness and tenacity for the athletes; this is reflected in the number of podium finishers to date – in six showings 17 divers finished in the top 3, nine in the men’s, eight in the women’s category.

Returning to Mostar, Australia’s 5-time champion Rhiannan Iffland can make it three wins in a row. The 30-year-old is flying high again after three victories in the season’s four events to date. With Jessica Macaulay from Canada and American Eleanor Smart, two Mostar podium-proven divers have finished in the top three this season and might be the reigning champion’s main challengers from the bridge.

The one athlete who poses a serious threat to Iffland’s title this season is Molly Carlson. The Canadian ended the Aussie’s 13-event winning streak at the season opener in Boston and is now the closest contender in the overall standings. The 23-year-old, who has been on the podium three times so far in 2022, is determined to improve on her 6th place from last year in Mostar.

2018’s winner Adriana Jimenez will be back on the 21m platform after an injury-infused no show in Norway. The Mexican is known and feared for her diving grace.

In the men’s it’s a reinvigorated reigning champion that leads the winners’ board in Mostar. Gary Hunt has three victories to his name in this World Series classic and comes to Mostar as the latest competition winner from 27m. The Frenchman can expect fierce competition from the Romanian pair Catalin Preda and Constantin Popovici, who both hold fond memories of the Stari Most.

Current World Series leader Preda started his cliff diving career here back in 2018; a debut that put him in the spotlight right from the beginning with a 3rd place finish. Popovici became the second diver ever to score a perfect dive with all 10s from the judges at this spot in 2019.

Fired up with their recent podium results in Oslo, Alessandro De Rose from Italy and England’s Aidan Heslop will be amongst those to watch closely when the men will be exposed to uncommon territory. In honour of the local diving tradition both the men and women will perform one dive directly from the 21m high bridge on Thursday before they return to the platforms for their Intermediate Dive and Optional Dive rounds on Friday and Saturday.

Three new divers will also make their first World Series appearance at the old bridge. James Lichtenstein and Susanna Fish of the USA, along with Leila Saliamova (IAT), will each be hoping to harness the magic of Mostar, the only place in World Series history where two wildcards have made the podium on their debut – the above mentioned Preda and Nikita Fedotov (IAT) in 2017.

Three days of competition, three previous wins for Hunt in this location and a hattrick of wins in sight for Iffland – Mostar will once again stand for high diving drama in its most delightful way in 2022.

More information can be found here