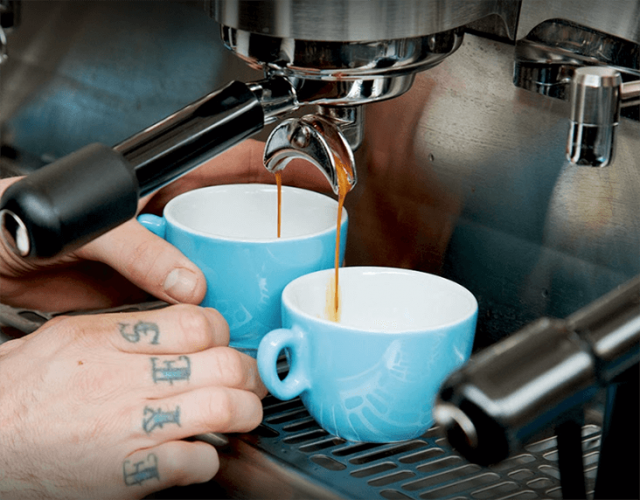 In recent years, Berlin has exploded with a multitude of artisanal, ‘third wave’ coffee shops, whose mission it is to elevate the status of the beloved coffee bean, exalted deliverer of caffeine. Fair-trade, single-origin roasted, and obsessed over by a legion of highly-trained baristas from and all over the world…wilkommen bei Berlin!

Here are a few places to grab a flat white, espresso, latte and more, brewed by some of the most exacting standards in the world (V60, Aeropress, Chemex…it goes on!) But don’t worry, you don’t need to be a coffee snob to enjoy—simply join the queue and order away.  In this highly caffeinated city, here are some of our favourites for you to brew over.

Step into Berlin’s gallery district and head to one of Berlin’s original third wave coffee shops and roasteries. The cafe has become rather notorious for their rules: for instance, there are no bathrooms on site; no laptops allowed (except at the standing laptop bar); no music played; no strollers allowed inside. They also serve their coffee rather strictly: sugar is discouraged (as it may detract from the flavour profile), no milk (unless it comes with the drink, like a latte or a flat white). Lest you get discouraged by The Barn’s approach, it’s worth mentioning that many of The Barn’s alumni have ‘graduated’ to head their own cafes over the years.

A must-visit! Ben, the eponymous owner, is a Tunisian-born Berliner adding a touch of Middle Eastern hospitality and flair to his itty-bitty shop in the Mitte ‘hood, decorated with Tunisian tiles and lamps. Do order the Turkish coffee (also known by many other names, such as mocca, or ‘cezve/ibrik’); you won’t find a better one brewed to such exacting standards of quality (unless you fly to Istanbul). You’ll also find delicious baklava and Tunisian mint tea here in a nod to his roots. (Side note: Ben used to work for The Barn before opening up his own cafe). The V60 pour-over is also recommended.

A great choice for a Sunday stroll due to its prime location next to the massive Mauerpark, which transforms into a flea market, bazaar, beer garden, and open-air karaoke gathering, amidst remnants of the old Berlin Wall. Stop by Bonanza to try a unique roasting style that roasts the beans as little as possible, allowing you to taste the true flavour of the bean itself, and hit the park for a glorious afternoon! They also operate a second flagship location where roasting and classes take place.

While you’ll find excellent coffee here (the exacting standards of Berlin coffee drinkers pretty much demand it), you’ll also find locals doing breakfast or brunch at Distrikt. With a laid-back and cozy atmosphere, order anything from a stack of pancakes to healthy fruit bowls and of-the-moment avocado toast. Leave room for dessert, perhaps for some delicious bread pudding!

Head to one of the nicest-looking coffee shops in the city, run by expat Aussies who know their stuff, and take their coffee seriously (but not too seriously). A lovely courtyard, stylish black-and-white interior, and wide selection of foods and snacks (shakshuka, avocado toast, sandwiches, croissants, cakes, etc.) make this the perfect breakfast or brunch spot.

Located in the trendy Kreuzberg neighbourhood, Five Elephant is known for their top-notch, single-origin roasts, which you will also find supplying coffee shops around town. Get them straight from the source, along with Berlin’s favourite slice of New York-style cheesecake. The cafe’s seating is limited, as it’s a smaller location.

Stop in for shots, shiny, terribly high-end espresso machines (if my mention of a ‘VA388 Black Eagle’ means something to you, make a beeline here!)  and some of the city’s best coffee. If you’re hungry, they serve breakfast, small bites, cakes (yes, even cheesecake…) and pastries too. Röststätte also operates a barista academy, so aspiring coffee geeks can also purchase equipment, books, and beans.+

Most of our recommendations are tucked away in quiet neighbourhoods or side streets, but Westberlin is right in the eye of the hurricane. Located a stone’s throw from touristy Checkpoint Charlie, this busy coffee shop and bookstore is a great alternative from the other coffee chains in the immediate area. You can’t miss its white Scandinavian-cool interior. Take a deep breath, and refuel for the rest of your day. Rumour has it, they also serve the famous Five Elephant cheesecake here too…