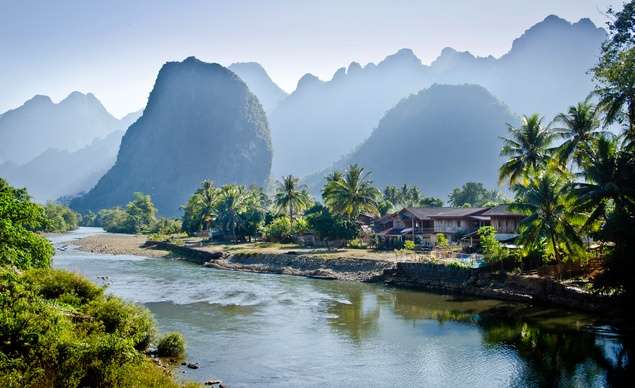 Known as the continent of extremes, Asia is a remarkable place with many attractions for tourists. The Orient has long been a magical place where dreams do come true. For this reason, tourists like to take in the sights and sounds of a completely different culture and lifestyle. Asia is a vast continent with crowded cities and small villages where the people may not be able to speak English. However, the vast majority is extremely friendly and will go out of their way to be helpful.

The best time to visit China is during the spring because the temperatures are better at this time of the year, but still the nights can be cold. Follow the route of the Silk Road, travel down the Yangzi River or imagine yourself in one of the Dr. Seuss stories when you visit Guangxi Province. In the larger cities you can shop ‘til you drop and come home loaded down with souvenirs and clothing from the Orient. Some of the major tourist attractions include the Great Wall of China, Tiananmen Square, the Forbidden City, Terra Cotta Warriors and the Stone Forest.

The Seongnam Temple is a must see on any itinerary to South Korea and you will be awestruck by the mountains and the greenery of the countryside. Seoul is the central city with many attractions, but Kyongju is known as the museum without walls and is a historic site because of its collections of Buddhist culture.

Surf an indoor wave or contemplate life in a Zen temple. Japan has everything you want in a vacation. Visit Matsuyama-jo, an original castle that was restored in the Edo Period. Visit the Tokyo Tower and Rainbow Town in the city of Tokyo and take excursions to other parts of the country, such as Honshu with its many parks and museums. Hokkaido still has a feudal air about it and the Japanese Alps in the center of Honshu Island are a natural playground for all ages.

Indonesia and the many other islands in this part of Asia have long been known for their popular tourist attractions and nightclubs. Resorts abound where you can stay in a straw-roofed hut or bask in luxury in a hotel. With magnificent beaches, majestic mountains and volcanoes, this part of the continent seems like paradise. In East Timor, you will find colonial towns, a lush interior and a “taste of Portugal” in Asia. The 7000 islands that make up the Philippines offer some of the best dive spots in the world and for the extreme in adventure you just have to visit the Cantabon Cave.

If your idea of a luxury vacation involves pristine waters, gently blowing palm trees and sandy beaches, then Maldives has what you want. Often called the “last paradise on Earth”, this country has a charm all its own and is a major destination for scuba divers and backpackers. Visit the Hukuru Miskiiy, the oldest mosque in the country dating from the 17th century and take guided tours to the small villages. You will feel like Robinson Crusoe on your own tropical island.

Explore the heights of Nepal and the age-old temples. The scenery and the culture will leave an imprint on your mind long after you return home. See the wildlife of the country at the Royal Chiwan National Park and take an elephant safari. Visit the Royal Palace in Katmandu and see the Kumari – the house of the living goddess. Shrines are abundant in this country for every purpose that you can think of. From Nagakot Village you have a spectacular view of Mount Everest. You can take a climbing expedition on any of the mountains in the country and even attempt to climb Mount Everest, if you wish.

Sri Lanka has many nicknames, such as the Jewel of the Orient and is a birdwatcher’s paradise.  With the friendly people and the low prices, you can see many things on a trip to this country. Visit the caves of Dimbulagala to get a look at the Buddhist heritage. There are temples at the base and you can explore 15 others on your way to the top. See the rolling plains and take a tour of a tea plantation.

India is a large country and the climate plays a large part in which part of the country you visit. Tourists try to avoid the monsoon period, which ends in October and this is when most of the visitors start arriving. Sail the backwaters of Kerala on a boat, which is propelled by a long pole, and visit the Taj Mahal in New Delhi. In Calcutta, you can visit many temples and visit the Keoladeo Bird Sanctuary.

Pakistan has a lot to offer in a vacation destination. Visit the National Museum and Hill Park in Karachi and the Chaukundi Tombs, just outside of the city, with its unusual collection of graves. The Museum at the archaeological site at Bhanbhore will provide you with many gold coins and other artifacts dating back to the 8th century. Visit the Shahjahan Mosque in Thatta, and shop for colorful handicrafts in Hyderabad. The sights and sounds of Pakistan will thrill you so much you might not want to leave.

Armenia is the country of monasteries, some of which are centuries old. They are spread throughout the country, so you might even want to take a holiday where you can get to visit all of them. Ani is the city of 1001 churches and the Sktorasten Tree is a favorite spot for picnics and taking pictures of the spectacular scenery. Visit the Berdavan Castle, built in the 10th century and drive through the narrow streets of the villages. The sights will leave an imprint on your mind forever.

In Azerbaijan, visit the walled city of Baku and visit the Museum of Carpets and Applied Arts and the Palace of the Shriven Shahs. 14th century fortresses dot the coastline and some of the rock paintings at Gobustan are more than 10,000 years old. In Caucasus, you can visit a 10th century mosque; visit the Seven Domes Royal Mausoleum and Seki, which may be one of the oldest settlements in the country.

Kazakhstan is known for the many spas, offering a wide variety of treatments. Most of the resorts offer spa treatments within an archaeological setting, as well as excursions to various parts of the surrounding locations. In the Southern part of the country, you can see the 260-foot sand dune on the desert, but there are also mountains here where you can take part in many different kinds of activities – climbing, hiking, and skiing. Visit the tallest wooden building in the world at Almatv and enjoy the unspoiled nature of the mountains.

Hands off! How to keep your valuables safe when travelling

How To Feel Confident If Your 18-Year-Old Is Traveling