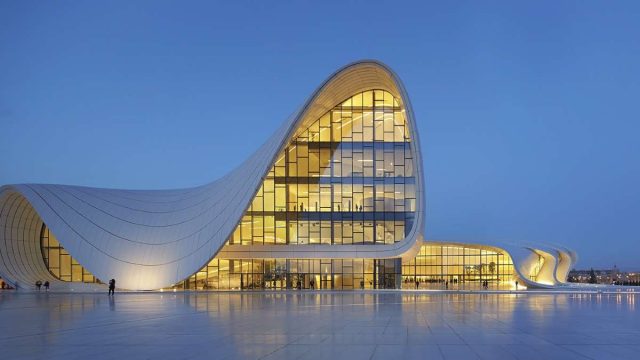 Designed by illustrious architect Zaha Hadid, the Heydar Aliyev Centre has become an iconic landmark of innovation in Baku and beyond. Since its opening, it has proved to be one of the most popular sites in the Azerbaijani capital and a must-visit destination for contemporary art lovers from all over the world. While the world is in lockdown and unable to travel, the Azerbaijan Tourism Board is offering up a world for you to explore from the comfort of your own home. Join us on a virtual tour of this pearl of post-modern architecture.

From a bright idea to a bright future

Zaha Hadid Architects were awarded the chance to design the centre following a competition in 2007. The main architectural principle was to house and showcase modern Azerbaijan’s cultural events, breaking free from the rigid and often monumental Soviet architecture that had been so prevalent in Baku. As such, the designers aspired to express the sensibilities of Azerbaijani culture and the optimism of a nation that has its gaze set on a bright future. Indeed, this was the perfect precedent to set at the centre’s grand opening, which was held on 10th May 2012 in celebration of the 89th anniversary of the National leader Heydar Aliyev’s birthday.

During her speech at Designs of the Year award ceremony at London’s Design Museum in 2014, Hadid confessed that the Heydar Aliyev Centre was an incredibly ambitious project for her, considering it as one of her foremost personal and professional achievements. She considered the centre one of the most important projects in her career – not least because it was awarded Design of the Year in the architectural category – but mostly because of its mesmerizing structural and symbolic harmony. The parametric design and modern materials embodied Hadid’s vision of blurring the lines between the Heydar Aliyev Centre and the capital city it is set against: a flowing symbol of unity.

The devil is in the detail

Fluidity of form is an essential part of Islamic architecture. Continuous patterns and embellishments flow from floors to walls, from walls to ceilings, and from ceilings to cupolas where they eventually re-join their surroundings and maintain these subtle reflections of nature in architecture. Inspired by Antonio Gaudi’s principle that straight lines do not exist in nature, Hadid made a special effort to ensure that no straight lines were used in the building. The Heydar Aliyev Centre works in harmony with its surroundings in one other way: the plot is situated on a steep natural slope. It was decided that the elevation should not be levelled out, but instead the natural terraces should be used to play with interesting perspectives.

One of the most important and indeed complex elements of the project is its facade. Its wave-like roof, almost flowing straight into the nearby Caspian Sea, has a total area of 40,000m2 and consists of 2,027 panels of various geometrical forms. What’s more, the bright whiteness of the cladding not only symbolises a bright future, but also allows Baku’s bright sunshine to accentuate the building’s unusual shape, casting playful warping shadows as the sun moves across the sky. At night, the centre is illuminated from the inside out, projecting a light from the heart of the project onto its surroundings – another nod to harmony, unity, and a new dawn of Azerbaijani architecture.

Nowadays, the Heydar Aliyev Centre is not only a tourist attraction but also one of the most meaningful landmarks for the locals. Saffet Kaya Bekiroglu, the project’s leading architect, once stated that this building has become something of a social catalyst for the Azerbaijani people, who enjoy its aesthetical, practical, and symbolic qualities. As the centre embodies the country’s softer, more creative, and optimistic side, it has become the perfect hub for education and cultural exchange.

But with its extraordinary exterior, the Heydar Aliyev Centre welcomes more than just people! The interior too houses some jewels of its own. The museum complex is home to a vibrant range of permanent curations and temporary exhibitions that explore the best of both local and international art, cultural heritage, engineering, and music.