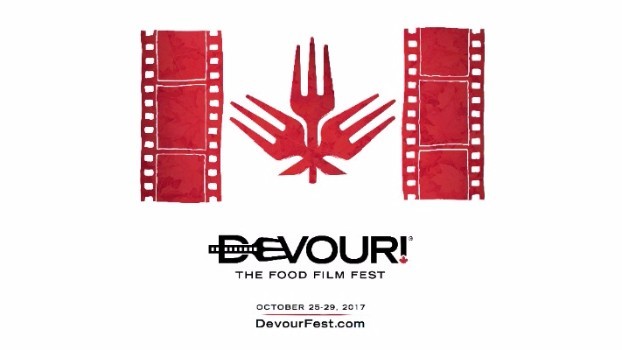 Devour! is the world’s largest film festival devoted to all things culinary. Each year, the festival showcases engaging cinema paired with extraordinary food and wine culture over five days in Wolfville, Nova Scotia from October 25 – 29, 2017. The seventh edition of Devour! is themed “A Celebration of Canadian Cinema and Cuisine” and will bring acclaimed filmmakers and chefs from across Canada  and internationally. The festival features 99 events including 72 films in 34 screenings, 23 industry workshops, three celebrity chef dinners, 22 tasting tours, and 20 special events including dinners and parties.

“In the span of just eight years, Devour! has grown to become a pre-eminent Canadian film festival and one of the most delicious events in this great country,” says Chef Michael Howell, Executive Director of Devour! “We cannot thank our many partners and supporters enough, as they have shared our vision of becoming one of Canada’s must-visit festivals. We are grateful for the ongoing support of The Province of Nova Scotia and their invaluable commitment to helping the festival grow.”

FESTIVAL TICKETS
The first round of tickets to the highly anticipated seventh edition of Devour! The Food Film Fest goes on sale Tuesday, August 29 at 10am AT. Tickets range in price from $10 to $999 (plus applicable taxes) for the exclusive Devour! The Festival Pass (limited quantities available). This all-access pass gives priority entry to the opening gala evening and all films, workshops, tasting tours, celebrity chef dinners, parties and special events. Devour! also offers a round-trip shuttle from Halifax to Wolfville for $20. For more information or to purchase tickets visit devourfest.com.
PROGRAMMING HIGHLIGHTS

Film Screenings
Devour! will showcase 72 films during 34 screenings. The festival’s 2017 Guest Curator Gordon Pinsent will help kick off the festivities during the Opening Gala taking place at the Fountain Commons at Acadia University on Thursday, October 26. The award-winning actor, screenwriter, director and playwright personally selected The Hundred-Foot Journey directed by Lasse Hallström as the opening screening of the festival.

The Celebrity Chef Dinner on Thursday, October 26 is themed Scotland vs New Scotland as three Scottish and three Nova Scotia chefs face off to create a French-influenced menu in tribute to Pépin.

For the first time, Devour! will bring a sample of the Devour! satellite events home with The Devour Roadshow Comes Homes on Friday, October 27.  Each chef will prepare one course inspired by a short film screened right in the dining room in Nova Scotia wine country’s most stunning new venue, Lightfoot & Wolfville Winery.

The Spotlight Gala on Saturday, October 28 will be the ultimate Canadian feast inspired by the Canadian film Grand Cru. Eight of Canada’s best chefs will combine their culinary genius to prepare an unparalleled patriotic repast.

Additional programming will be announced in the weeks leading up to the festival. For full programing details visit devourfest.com.