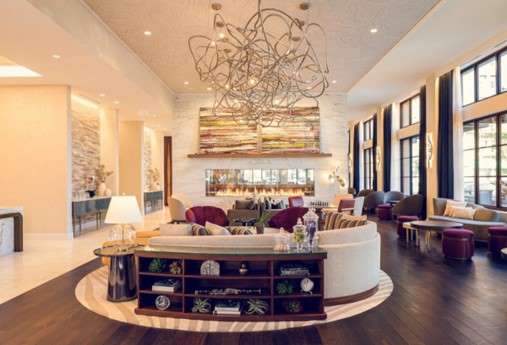 SOPHY® Hyde Park has been named one of the 10 Best Hotels in Chicago by the readers of Travel + Leisure in the 2022 World’s Best Awards. The readers also ranked the city of Chicago among “The Best 15 Cities in the United States.”

The stylish 98-room boutique hotel is located in the cultural heart of Chicago’s Hyde Park neighborhood. The property is near the University of Chicago, the new David Rubenstein Forum, the Museum of Science & Industry, Frank Lloyd Wright’s Robie House and the site of the future Obama Presidential Center.

Since opening in 2018, it has become the social hub for the diverse urban community that is the very definition of Hyde Park. The lobby living room with its striking fireplace is a gathering space to mix and mingle, as is the hotel’s Mesler Chicago restaurant, bar and alfresco space called The Sanctuary. Under Executive Chef Alejandro Arreola, the former Chef de Cuisine at Four Seasons Hotel Chicago and The Ritz-Carlton, Chicago, it’s become a chef-driven destination with an inventive menu of comfort food reimagined for 21st century palates.

“For an independent boutique hotel on Chicago’s South Side, this is an extraordinary moment,” said Anthony Beach, General Manager of SOPHY Hyde Park. “We are immeasurably grateful for the recognition from the readers of Travel + Leisure. I couldn’t be prouder of our SOPHY Hyde Park team for going above and beyond every day. This is a win for all of us and for the historic Hyde Park neighborhood.”

Lightwater Cove – an Oceanfront Sanctuary to Delight Your Senses