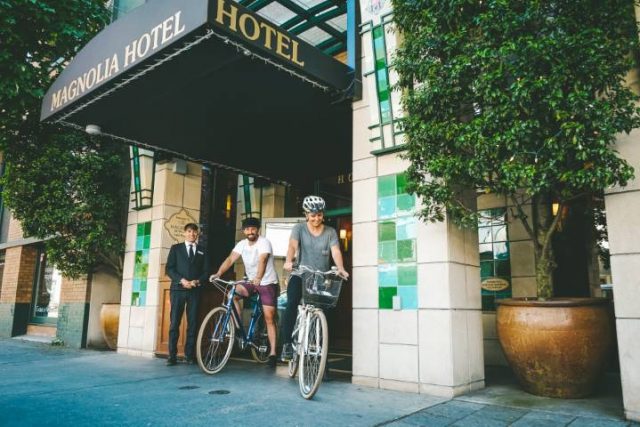 Enjoy the rolling hills of Vancouver Island’s bucolic farms, fields and countryside with the Magnolia Hotel & Spa’s new Curated Trail maps and Taste of the Island package with dinner for two. Helping guests explore at their own pace and in their own bubble, the first route focuses on the farm shops, apiaries and cideries on the Saanich Peninsula, and the second offers a self-guided tour of the wineries of the Cowichan Valley, an hour to the north.

Just a 30 minute drive to the west of Victoria, farms, orchards and vineyards run the length of the 30km Saanich Peninsula, known unofficially as “The Island’s Salad and Fruit Bowl”. Stops include the 500-acre Michell’s Farm Market where they grow everything from apples to zucchini; Sea Cider Farm & Ciderhouse, which is home to a portfolio of 12 hand-pressed ciders, as well as a selection of locally-made Grazing Boxes by Truffles Catering; Roost Winery, Bistro and Farm Bakery with farm-fresh menus offered all day; Rathjen Cellars, home to some of the oldest vineyards on Vancouver Island, producing varietals such as Auxerrois and Ortega with high quality grapes; and Country Bee Honey Farm, which not only sells delicious honey and beeswax products but also allows guests to wander through a picture-perfect wildflower meadow, in bloom throughout July and August.

For guests who want to explore a little further afield, the Cowichan Flavour Trail pauses at the brand new Malahat Skywalk for panoramic views of the South Island before heading up the east coast of Vancouver Island to the Cowichan Valley. Known as “Canada’s Provence” for its Mediterranean-like climate, the Cowichan Valley was named as an official sub-appellation last year and is home to countless farm shops, breweries, restaurants and bakeries that dot this lush and verdant corner of the coast. Sip on a delicious glass of sparkling Charme de l’Ile at Averill Creek Vineyard or an earthy Pinot Noir at Blue Grouse Estate Winery before sampling small batch brews at Red Arrow Brewing Co. or hand-crafted cider and artisan pizzas at Merridale Cidery & Distillery.

The Magnolia Hotel & Spa’s Taste of the Island package includes an overnight stay in one of the hotel’s beautifully appointed guest rooms; $75 nightly dining credit to The Courtney Room, whose chefs work with many of the Island’s farms to produce delicious dishes that truly evoke a sense of place; a choice of Curated Trails maps including the new Flavour Trails, Craft Breweries, Tapas Trail and more; and complimentary use of the hotel’s cruiser bicycles. Rates range from $309 to $399 per night, minimum stay of two nights.  With just 64 guest rooms, the Magnolia Hotel & Spa’s boutique nature has adapted well to travel during the pandemic. Stringent COVID-19 policies keep guests and staff safe in all areas of the hotel, including at signature restaurant The Courtney Room and The Spa Magnolia. Guests have the reassurance of the hotel’s multi-award winning customer service to put them at ease during a stay at the #1 hotel in Canada, as voted in the 2020 Tripadvisor Travelers’ Choice Awards.

Live like a Bridgerton at The Gainsborough Bath Spa

This website uses cookies to improve your experience while you navigate through the website. Out of these, the cookies that are categorized as necessary are stored on your browser as they are essential for the working of basic functionalities of the website. We also use third-party cookies that help us analyze and understand how you use this website. These cookies will be stored in your browser only with your consent. You also have the option to opt-out of these cookies. But opting out of some of these cookies may affect your browsing experience.
Necessary Always Enabled
Necessary cookies are absolutely essential for the website to function properly. This category only includes cookies that ensures basic functionalities and security features of the website. These cookies do not store any personal information.
Non-necessary
Any cookies that may not be particularly necessary for the website to function and is used specifically to collect user personal data via analytics, ads, other embedded contents are termed as non-necessary cookies. It is mandatory to procure user consent prior to running these cookies on your website.
SAVE & ACCEPT
MORE STORIES
Australia & New Zealand