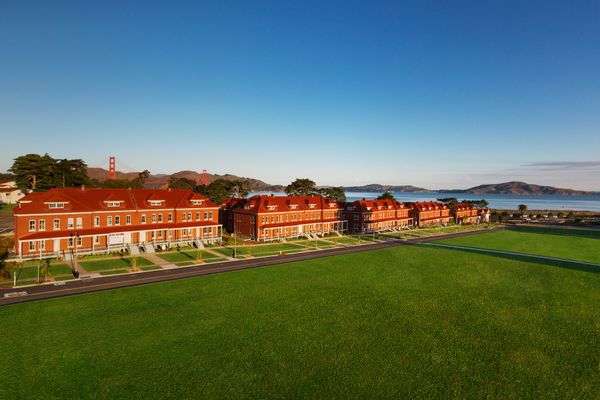 The new Lodge at the Presidio, located in San Francisco’s national park, is now taking reservations in anticipation of a June opening. As the closest lodging in San Francisco to the iconic Golden Gate Bridge, this newly rehabilitated historic boutique hotel will provide unparalleled views of the bridge, the Presidio’s lush 300-acre forest, the San Francisco Bay, and the city skyline.

The park’s first hotel, Inn at the Presidio, has enjoyed a 94% occupancy since opening in 2012, welcoming over 75,000 guests in its 26 rooms in that time. The Inn has earned such accolades as the “Historic Hotels of America Award of Excellence” and #1 San Francisco hotel by “Condé Nast Traveler’s Readers’ Choice Awards.”

“We have been very fortunate to have such high demand for accommodations in the Presidio,” says Karen Maggio, Director of Hospitality for the Presidio Trust. “We are thrilled the Lodge will provide 42 additional rooms right on the Main Post in the heart of the park. The Inn will remain a quieter retreat setting, tucked further back into the forest, allowing us to offer the best of both worlds.”

From its breathtaking views to its unique location by the Visitor Center and future site of the Tunnel Tops connecting the Main Post with Crissy Field, the Lodge will bring a one-of-a-kind experience for visitors to The City by the Bay.

The 42-room Lodge at the Presidio is housed in the former army post’s Montgomery Street Barracks, built between 1895-97 by the US Army to accommodate six artillery companies, a cavalry troop, and two infantry companies. Its rehabilitation is part of one of the largest and most ambitious historic preservation projects in the U.S., joining over 470 structures in the Presidio on the National Registry of Historic Places. According to building principles of “adaptive reuse,” the Lodge will be reimagined as a contemporary, comfortable lodging space, while preserving historic elements and original character. The new Lodge will exemplify the highest standards of sustainability, in compliance with the US Green Building Council’s Leadership in Energy and Environment Design (LEED) standards.

Centrally located on the Main Post in the heart of the Presidio, the Lodge provides easy access to the amenities of the park and downtown San Francisco, serving as the jumping off point for exploration. Guests are surrounded by an urban national park that offers 24 miles of hiking trails, 25 miles of bikeways, an 18-hole Presidio Golf Course, and cultural and recreational tenants such as the Walt Disney Family Museum, the recently opened Presidio Visitor Center, and the Presidio Officers’ Club. To explore the city, guests can hop on the free PresidiGo Shuttle to downtown San Francisco, making the Lodge a perfect starting point for both natural and urban adventures.

Designed by Architectural Resources Group and LC Interiors, the Lodge’s three-story interior reflects the surrounding natural beauty by “bringing the outdoors in.” The majority of guestrooms will feature stunning views of the Golden Gate Bridge, the surrounding forest, and/or the San Francisco Bay. The Presidio’s rich history will be showcased throughout the property with artisan details and memorabilia, complemented by comfortable, modern finishes, and furnishings.

Guests of the Lodge will enjoy recreational social areas including a courtyard garden with a fire pit, a front porch with rocking chairs, and a large dining room lounge where a generous complimentary breakfast and evening wine and cheese reception are served. Concierge service will be available 24 hours to help active travelers discover the national park and its environs.